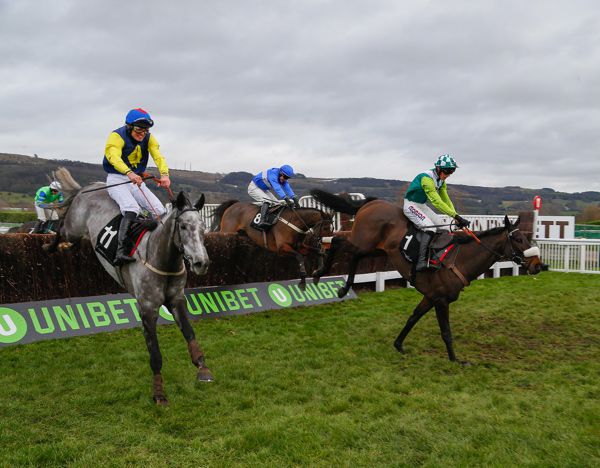 Nicky Richards expects Guitar Pete to put up another bold show in the BetVictor Gold Cup at Cheltenham.

The nine-year-old returned to action following almost a year off the track with a smooth success at Wetherby recently, and is back at the scene of his biggest success over fences.

He landed the December Gold Cup in 2017, having won the same Wetherby race en route, and finished third in both this race and when defending his crown in December last year.

“He’s well seasoned for these races and runs well in that type of race,” said the Greystoke handler.

“As he’s got older he probably needs soft ground, because on good ground he ideally wants three miles so it might just steady them up.

“Hopefully he’s thereabouts at the second-last and he’ll fly up the hill for us. He normally runs well there.”

Back in second at Wetherby was Kerry Lee’s Happy Diva and while the mare is better off at the weights, her trainer still feels she faces a tough task to turn the tables on Guitar Pete.

“She was second to Mister Whitaker in the Colin Parker last year on good ground and beat the National second (Magic Of Light) at Huntingdon in a mares’ race.

“She’s in excellent order, but on the book she can’t beat Guitar Pete. I’d like to think she’d improve for her first run of the season, but Mr Richards will probably think the same.

“We need better luck than last year (brought down when going well four out), but Richard Patrick gets on very well with her and she’s entitled to finish in the frame.”

Colin Tizzard’s Slate House blew his handicap mark somewhat when strolling to victory at the October meeting — but he could still be well treated now he is back in form, given how good he once looked over hurdles.

“He had a great start to his novice hurdle campaign winning the Grade Two, then that sort of petered out and he was bit keen and not finishing his races,” said assistant trainer Joe Tizzard.

“He then chipped a bone in his knee at Aintree, which stopped him having any summer off and hence last year it was about getting going again.

“The wind op was always going to happen and we talked about that before the injury and he ended up having two as he had the soft palate, then we gave him the full op. We were just able to treat him properly this season.

“His form from a novice over hurdles in the autumn is strong. I think he is back to that horse (the one that beat Summerville Boy). I think he proved that three weeks ago.”

Paul Nicholls runs Magic Saint, another to have had a wind operation since he last ran.

Assistant trainer Harry Derham said: “We were a bit disappointed with him in the Grand Annual. We really fancied him the whole way along. He travelled well turning in, but didn’t pick up.

“He is very well. His work this season is good, but we thought that last season, hence we thought he would run well in the Grand Annual.

“It’s his first run of the season and his work has been very good. I’d like to think at some stage he will win a really nice race — it will be a difficult thing to do first time out, but we are hoping for a good run.

“Two and a half miles on soft ground, if they go fast and he settled and switches off and gets into a nice rhythm, could work well.”

David Pipe has some way to go to catch his father, Martin, who won the race eight times, but he was successful with Great Endeavour in 2011 and has two sound chances through Eamon An Cnoic and Warthog.

Of Eamon An Cnoic, Pipe said: “He will love ground how it is. He ran very well at the Festival last season behind Siruh Du Lac and he is getting more weight off him this time round. Hopefully he has got a good each-way chance.

“He was fifth in the race last year off 3lb lower on quicker ground. I think I’ve got him in good form at home and hopefully he can translate that to the track.

“Warthog jumped beautifully at Sandown first time out and that is a hard place to do that. He was never quite the same afterwards and he just seemed to lose his confidence.

“He seems good back at home and he has a nice low weight. Hopefully David Noonan can get him into a good rhythm and enjoying himself. I don’t know if two and a half on that ground might be stretching him a little bit.

“We were going to run on Friday, but this is a big race so we thought we would take our chance.”