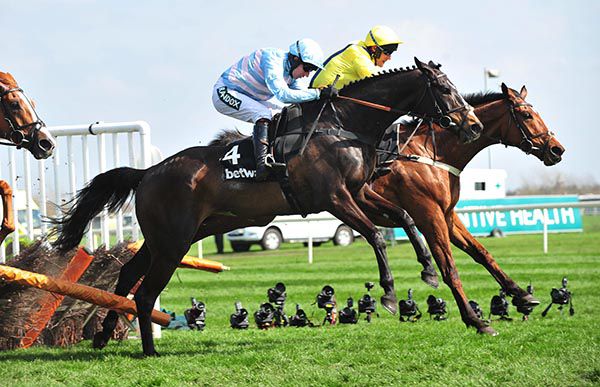 Runner-up to Samcro at the Cheltenham Festival before striking Grade One glory at Aintree a couple of seasons ago, the eight-year-old was initially sent over fences last autumn, but a couple of disappointing displays prompted a return to the smaller obstacles.

Despite finishing third behind star stayer Paisley Park in the Cleeve Hurdle, Black Op never quite looked back to his best, but a wind operation during the summer appears to have had the desired effect.

George’s charged looked the part on his return to chasing at Stratford in late October — and after he gave the high-class Champ a run for his money on his latest appearance at Newbury, his trainer feels the time is right to step him back up in distance at Kempton on Boxing Day.

George said: “Black Op is in great form and has come out of his last run really well.

“We’ll step him up in trip now, and all being well we’ll aim for the Kauto Star at Kempton on Boxing Day.

“I think stepping up to three miles will suit him.”

Like Black Op, the 2018 Supreme Novices’ Hurdle hero looked to have got his career back on track when winning on his chasing bow at Uttoxeter, but a fall at the water jump in last week’s Henry VIII Novices’ Chase at Sandown was a step backwards.

George said: “Summerville Boy is A1. Obviously that is the last thing we wanted to happen at Sandown, but the vet has checked him over and he’s fine — which is the main thing.

“I think he made a bad mistake at the ditch and then he saw a water jump for the first time and panicked and ended up on the ground.

“We’ll see how he is in the next week or so, and then make a plan.”