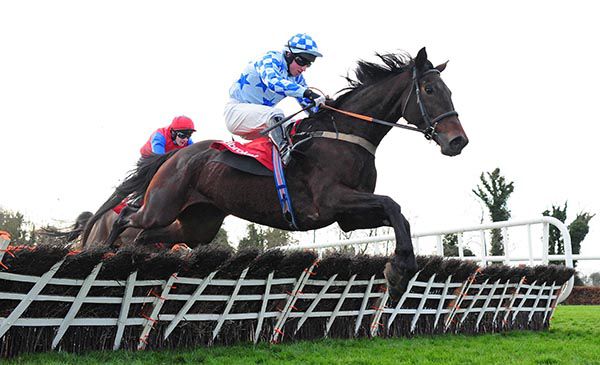 Darrens Hope (7/2 into 11/4 second favourite) struck at the first time of asking over flights in the Ladbrokes Mares Maiden Hurdle at Punchestown this afternoon.

Owned/trained and bred by Bob Murphy at his Cappoquin base, the point-to-point and bumper scorer raced close up here under Mikey Fogarty.

The daughter of Oscar led at the second and made a slight mistake at the fifth.

Ridden and pressed entering the straight, Darrens Hope was strongly pressed at the last.

From there she kept on well to assert on the run-in, by four lengths from market-leader Et Dite

“She’d run in a couple of very good bumper races and she deserved a break," said Murphy.

“The last time we should have made it so I knew from the last day that we’d have to make it today.

“We only did one or two schools with her at home and anything we did with her was at home.

“I have her full sister to run in about three weeks’ time in a mares’ maiden hurdle and she’s a half-sister to Acting Lass who runs on Saturday (in the Peter Marsh at Haydock).

“Hopefully we can get some black type with her.”

M.M. McDonagh, rider of Getaway Gold trained by Michael J. McDonagh, reported to the Clerk of Scales that his mount did not handle the ground.