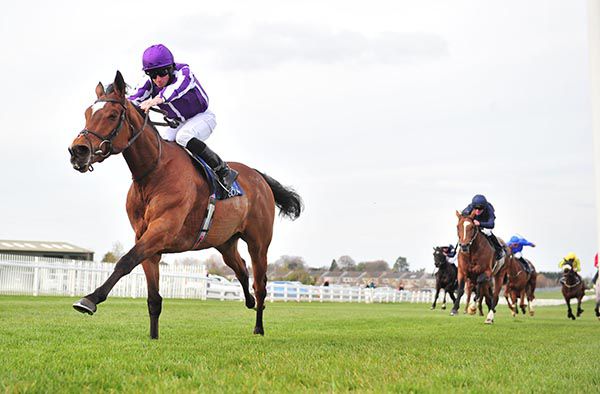 One of last year's star performers Magical returned to action with a win at Naas today as the Aidan O'Brien trained filly justified even money favouritism, under jockey Ryan Moore, in the Group 3 Alleged Stakes.

The daughter of Galileo gained Group 1 success in the British Champion Fillies & Mares Stakes at Ascot in October before ending the season a fortnight later when valiantly chasing home brilliant filly Enable in the Breeders Cup Turf at Churchill Downs.

Today the 122 rated four year old returned to winning ways when stretching clear of stablemate and pace-making Flag Of Honour winner of last season's Irish St Leger, to score a comfortable four and a half length win.

Afterwards O’Brien reported “that was a lovely start back for her and you couldn’t be happier with it.

“She has the choice of going for the Prix Ganay in two weeks or go for the Mooresbridge and onto the Tattersalls Stakes. What we thought we would do is give her a few runs, a little rest and then the autumn.

“She’s physically done very well over the winter, and we were never as happy with her as we are now.

“She travelled into the race very well and was just ready to be let go. That should do her good, and she had an easy enough time.

“I was very happy with Flag Of Honour as well. He doesn’t need to go as far as we have run him. He could go for the Vintage Crop at Navan or he could go for some of the races that the filly (Magical) goes for. He’s happy making the running.”

Both O'Brien and jockey Moore were completing double on the day following their opening race win with Monarch Of Egypt.