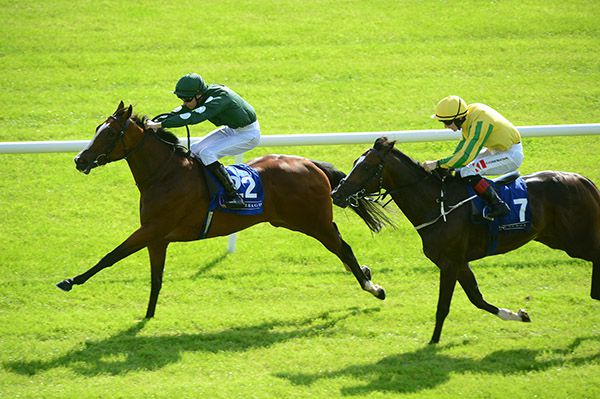 A massive field of 29 went to post for the opening auction maiden in the Curragh but the race itself boiled down to two horses with Brook On Fifth getting the better of Edward Hopper.

Newcomer Brook On Fifth picked up the lead with a quarter of a mile to travel but soon had Edward Hopper on his tail.

The only horse that was able to go with them in the final furlong was Champers Elysees in third.

However, at the business end Brook On Fifth kept on well for Donnacha O'Brien to score by three parts of a length at 5/1.

Edward Hopper, the 4/1 favourite, kept on but couldn't reel in the winner.

Champers Elysees was four and three quarter lengths adrift in third at 40/1 on her debut.

Brook On Fifth holds an entry in the Group One Fillies' Mile.

Donnacha O'Brien said: “I think Joseph (O'Brien) liked her. It's hard to know how good they are but at the same time when there are that many runners they can't all be useless.

“She was good. She was still a little bit green when I got there, hanging a little bit both ways, so I think there is a bit of improvement in her but she definitely has talent and I think she's a smart filly.

“She did it smartly and pricked her ears towards the line.

“I think you'd have to look at stakes company with her now. Going to those black-type races you will learn more from there, that's definitely the next step.”