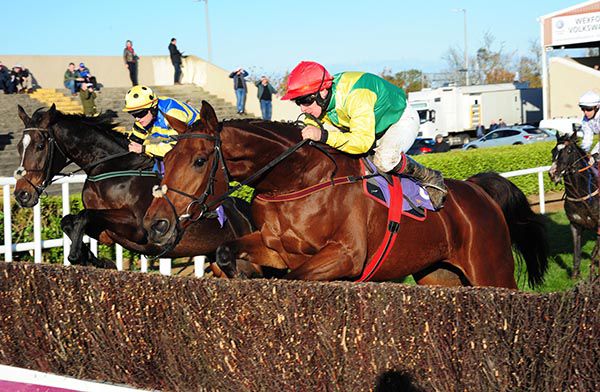 Castlebrook and Phillip Enright enjoyed themselves out in front in the beginners' chase at Wexford.

The six-year-old gelding jumped notably well and moved clear at the third last. Stones And Roses cut into the lead rounding the home turn in conjunction with Cherokee Bill

Castlebrook still had plenty in the tank, however, as he opened up after jumping two out. Once he popped the last, Enright could afford a peek over his shoulder and the pair came in by a comfortable five lengths at 9/2 having drifted out from 7/4 in the morning.

Stones And Roses could make no impression in second at 8/1, however, he was four and a quarter lengths ahead of Batcio at 20/1.

Trainer Jimmy Mangan said: “He's very unfit yet but the race suited him, so we said we'd have a go.

“Christmas will be his big target, in Limerick.

“Everybody was waiting for him because he's a chaser and nothing else. He was unlucky not to win a bumper, and a hurdle race, but that's all history now and it's onwards and upwards hopefully.

Castlebrook was last seen finishing fourth in a maiden hurdle at Cork in early January.