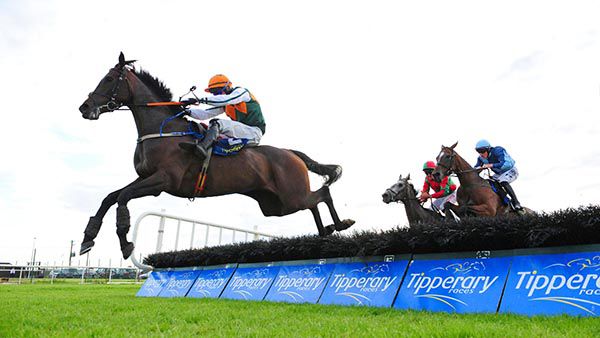 Paul Cawley recorded his first success in the professional ranks, as he partnered Helly Hansum to victory in division one of the Follow @tipperaryraces.ie Handicap Hurdle.

Second at Clonmel on her penultimate start, the Denis Hogan trained five-year-old since disappointed at Tramore and was sent off at 12/1 this evening.

Settled in mid-division, the five-year-old daughter of Fame And Glory was pushed along from three out. She made good progress to challenge from the next and hit the front before the final flight, keeping on well from there to score by two and a quarter lengths. Tungsten Kid (3/1f) finished second under Davy Russell for John Brassil, while Officers Mess (11/2) and Humps And Bumps (7/1) were third and fourth respectively.

"She ran around Tramore the last day but it was too sharp for her. She stays going and is all heart," said Cawley of the Move In Corner Forward Syndicate owned bay.

"I turned professional last week and had done a stint in America in the spring. Things dried up over here but I enjoyed every minute of it and I'm back with Denis now. I was there for four years and he was super to me and I owe a lot to him.

B.J. Cooper, rider of Bere Haven trained by Ian O'Connor, reported to the Clerk of Scales that his mount pulled up having stopped quickly.