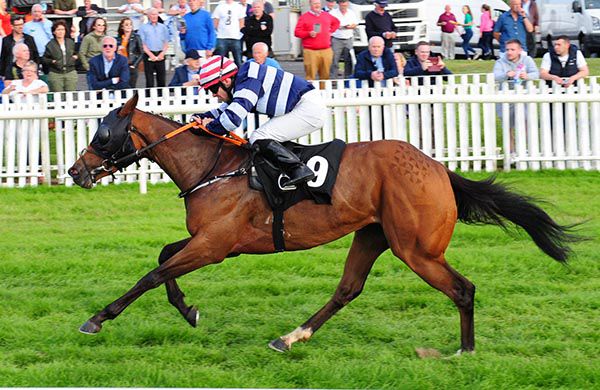 After completing a double at Musselburgh yesterday, Gavin Cromwell repeated the feat at Bellewstown this evening. Ally Cay (16/1) brought up the brace for Cromwell in the Lougher Stables Handicap, following on from the earlier success of Tritonix

Having shown little on her previous four outings, Ally Cay was fitted with a visor for the first time this evening and was sent off at 16/1 under Wayne Lordan.

Settled towards rear, she was pushed along and made gradual progress through the field in the straight.

She was ridden to lead on the outer inside the final furlong and powered home from there, going on to score easily by four lengths.

Stable mate FInsceal Rose (16/1) finished second under Andrew Slattery, while 25/1 chance Come Back And Stay was another three lengths away in third. Airgead was returned the 11/4 favourite and he finished a disappointing eleventh.

"I knew she wasn't useless but she disappointed the last day and I was scratching my head,” said Cromwell.

“We tried the visor on her and it obviously woke her up. They went very hard and she was flat to the boards everywhere.

"She won well enough and I suppose the handicapper will probably give her a nice enough rise. She's still going to be in that low grade and we'll look for something similar again."

The Stewards enquired into the apparent improvement in form of Ally Cay, trained by Gavin Cromwell, placed, first compared with its recent form. Evidence was heard from the trainer concerned who stated that the improvement in form was as a result of the application of first time visors. Having considered the evidence the Stewards noted the explanation.

The Stewards enquired into the apparent improvement in form of Finsceal Rose trained by Gavin Cromwell, placed, Second compared with its recent form. Evidence was heard from the trainer concerned who stated that he could not provide a reason but was of the opinion that she stayed well and that she had come from a long way back off a strong gallop. Having considered the evidence the Stewards noted the explanation.