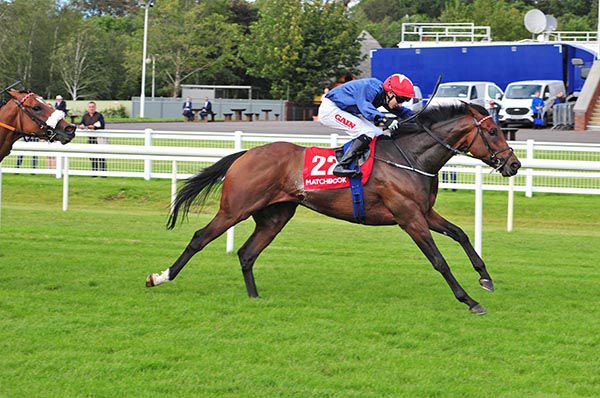 Chagall is ridden out by Andrew Slattery
© Photo Healy Racing

Chagall completed a quick-fire double for Eddie Lynam, as he made the breakthrough in the Matchbook Straight Seven Handicap.

Unplaced in his previous ten starts, the son of Slade Power put in an improved performance on his most recent outing at Gowran, finishing a close fifth to Little Camacho.

Available at 11/1 in early shows, the Andrew Slattery ridden bay eventually went off at 7s in the colours of owner/breeder Stephanie Von Schilcher.

Soon in front in the near side group, the 43 rated victor was ridden over a furlong from home and kept on well in the closing stages, going on to score by a length and three parts. Count Of Carabass (6/1jfav) ran on well to take second under Billy Lee for Hillary McLoughlin, while the well-backed Sestriere (25s early and from 14s to 8s on-course) was a nose away in third. Ingelara completed the placings in fourth, while Very Smart who was the other joint-favourite finished tenth.

Lynam, who was on the mark thirty minutes earlier with Romantic Proposal said afterwards: "I'm showing my age because I trained the father and the mother.

"I think the mother made the nine o'clock news, Dangle. First time out she ran at the Curragh in a maiden and was as green as grass.

"When Johnny (Murtagh) gave her a thump she took off and he had a job pulling her up, she finished fifth.

"We were called in before the stewards and she was banned for two months, Johnny was going to miss the Arc and my kids were crying for about a week because it was on the nine o'clock news that a trainer had been done.

"Stephanie has had horses with me a long time. The dam won and was group placed.

"This fella is a funny old devil but he loves front-running and he ran well from the front the last day.

"Even with all the runners I said to young Andy bounce out and try and make all. It was a long way up, it was a long sprint - a bit longer than a cigarette that's all I can tell you!

"He got home anyway and it's good to get it."

The Stewards informed F.Costello, trainer of An Cait Dubh that a repeat performance from his charge, who refused to leave the stalls, may render it liable for a suspension.