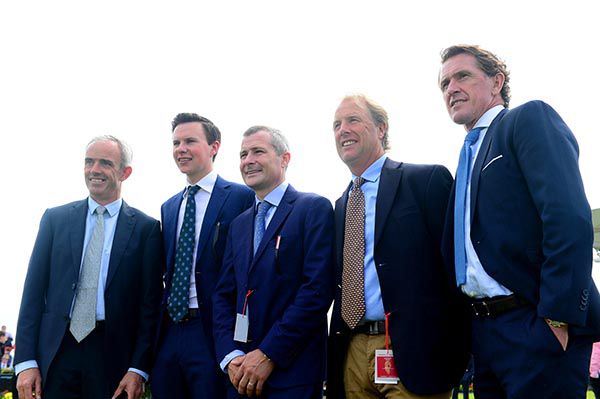 Nine of the greatest Flat and National Hunt jockeys of all time feature among the declarations for day two of the Longines Irish Champions Weekend at the Curragh.

The Pat Smullen Champions Race for Cancer Trials Ireland at 4.50pm is race seven on a bumper nine-race card, and features a never-to-be-repeated opportunity to see living legends take to the saddle for the last time.

“I’m so grateful to these lads for coming out of retirement to ride in the race, it looks like the race of a lifetime and I’m just disappointed that I can’t ride in it! I know that it has meant a few gruelling weeks for some of them as they get fit for it and I really do appreciate it,” said Smullen.

“This race will hopefully raise awareness of pancreatic cancer but it is also going to contribute to our goal this weekend of raising as much money as possible for Cancer Trials Ireland, who has two vital cancer trials ready to go.

“The generosity people have shown has been heart-warming. Within 24 hours we had found sponsors for all of the jockeys and that’s a credit to the generosity of Adare Manor, Ballymore Properties, Bar One Racing, Betfair, BetVictor, the INBA, Ladbrokes, Paddy Power and SkyBet, as well as The Underwriting Exchange, The Patron Group and Racing TV. Thanks to one and all.”

The Pat Smullen Champions Race for Cancer Trials Ireland has attracted a competitive field, topped by the 90-rated Quizical, trained by Sheila Lavery, which will be ridden by 20-time British champion Jumps jockey Tony McCoy.

Paul Carberry teams up with the classy Katiymann for trainer Michael Halford and owner Paul Rooney. Ted Durcan, a close friend of Smullen and a rider who has had success in the saddle for trainer Dermot Weld in Dubai, again joins up with the Roswell House maestro to take the ride on the progressive three-year-old Kattani.

Trainer Ger Lyons ran a hugely successful social media campaign to poach the services of Johnny Murtagh. As of declaration time the ‘What’s Johnny worth?’ fund had swelled to €17,000 — enough for Lyons and Murtagh to renew a partnership that enjoyed so much success, including at Group 1 level when Lightening Pearl won the Cheveley Park Stakes in 2011. Murtagh rides Red Striker for Lyons in the colours of red-hot owner David Spratt.

Kieren Fallon lurks dangerously at the bottom of the weights on the unexposed three-year-old Recent Revelations for trainer Gordon Elliott, while recent Gowran Park winner Finding Nero will be partnered by Richard Hughes.

“I’m delighted with the quality of the race, both in terms of the incredible champions who will ride in it, as well as a competitive field of horses that will give us great excitement on Sunday. It’s a proper race too with all horses running off their correct marks, which is what the jockeys wanted,” says Smullen.

“Without the horses though, we wouldn’t have a race so a big thanks to the trainers and the owners of Sunday’s field, most of whom I had the pleasure to ride for during my career.”