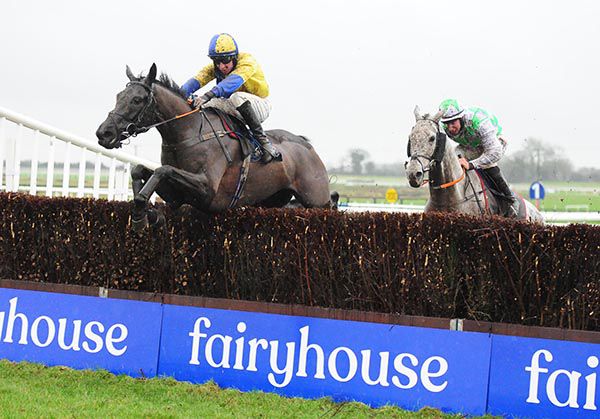 McNamara won the opening four-year-old winner’s hurdle, on Wolf Prince for Gavin Cromwell, and he was aboard Charlie Stout for Shane Nolan.

Charlie Stout tracked the leaders, and he was sixth at the halfway stage.

Fourth five out, the nine-year-old made headway travelling well to lead entering the straight.

Ridden after two out and a length up at the last, he kept on well on the run-in to get the job done in the 100,000 Euro event.

“That's brilliant. He was unlucky at Christmas and was unlucky with Thurles being called off too,” said Nolan.

“We stuck him in this beforehand thinking if he won in Thurles or Leopardstown he'd be in the handicap.

“When he got carried out in Leopardstown we said we'd take a chance.

“I'm just delighted for the horse to have come back because he was lost there for a while but we figured out what was wrong with him and got him right.

“He goes on any ground but I think he's at a stage now where nicer ground suits him better. He spent many runs running on real heavy ground so I'd say at this stage he doesn't mind a bit of nicer ground.

“We might go to Leopardstown, he'll have an entry anyway in something at the big meeting.

“This is by far my biggest winner and it's brilliant. It's a great pot and it's great to have a horse like him.

“We don't have many of his calibre, even though he's only rated 123, he's a long way above what we have.

“It's great to be able to come here and be competitive and I'm delighted that our luck changed as well. He was due a turn.”

For his part McNamara reported: "I got to the front way too soon and you wouldn't want to hear the things that I was saying in my head turning for home!

"He was brilliant for a novice and saw it out really well.

"It's great and definitely my best ever day. I did have a double before at Clonmel but this is even better."