Chesapeake makes all in Killarney opener 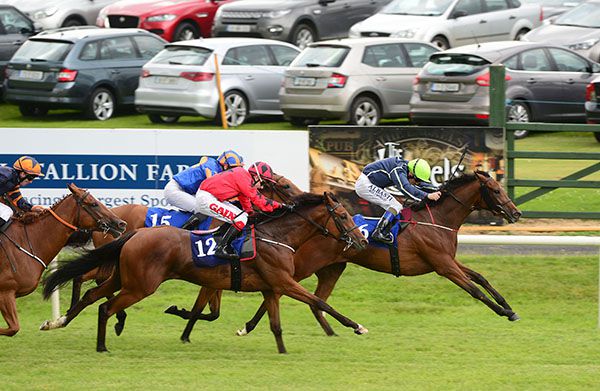 Chesapeake Shores made all to take the opener at Killarney this evening, the Seamus Mulvaney Bookmakers Fillies Maiden.

An eye-catching fifth on debut at the Curragh in May, the Fozzy Stack trained bay was disappointingly beaten into third when sent off favourite on her next start at Limerick.

Fitted with cheekpieces for the first time this evening, the daughter of Camelot went off a 5/1 chance (from 6s) under Chris Hayes.

Drawn on the rail in stall one, the bay victor was sent straight to the front by Hayes and battled on gamely when pressed and ridden from the two furlong pole.

Half a length was the winning margin, with Lighthouse Lady (12/1) filling the runner-up spot under Andrew Slattery for Edmond Kent. The Tooth Fairy (7/1) was another head back in third, while Peruvian Lily and For Your Eyes the 7/2 joint-favourite, were fourth and sixth respectively.

Stack said afterwards: "It was important she won as she is a half-sister to Frozen Fire who won the Irish Derby.

"We'll chat to the owners to see whether or not she'll run again and we'll see if there are any races over 1m 4f for her coming up.

"It's good she has won today and that is mission accomplished."

K.J. Leonard, rider of Adamantly trained by Richard John O'Brien, reported to the Clerk of Scales that his mount burst a blood vessel during this race.

The Irish Horseracing Regulatory Board Veterinary Officer reported to the Stewards that Adamantly trained by Richard John O'Brien was noted to have blood on both nostrils as a result of exercise induced pulmonary haemorrhage.

The Stewards ordered the withdrawal of Coasting Along, trained by J.H. Scott, for failing to lodge the passport in accordance with the provisions of Rule 90 (i).