Clementina gets off the mark, 'jolly' unlucky 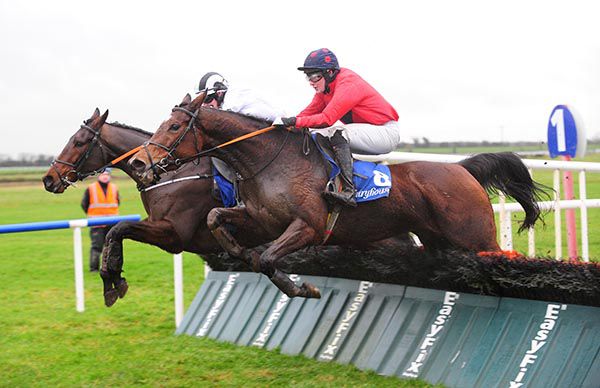 The Tony Martin trained Clementina got off the mark at the 20th attempt at Fairyhouse today as the mare landed the BoyleSports Bet E10 Get E40 Handicap Hurdle in a race where favourite Ilikedwayurthinkin caught the eye with a late flourish.

Clementina had failed to win in a bumper, ten flat races and eight previous hurdle races but today came good under Eoin O'Connell who produced the daughter of Walk In The Park to lead after the last before scoring a two lengths win over Ming Dynasty

There was head-in-hands heartbreak for followers of the J.P. McManus owned 7/2 favourite Ilikedwayurthinkin in the race as the gelding, contesting his first handicap, landed awkwardly at the third last flight and was brought wide into the home straight.

From that point jockey Mark Walsh resorted mostly to hands and heels, administered one crack of the 'persuader' on the run-in, as the pair passed the line a never-nearer fifth, and thus failed by an agonising half length to land any each-way money in the 16 runner handicap.

Winning trainer Tony Martin wasn't present but jockey O'Connell later commented “Tony put a tongue-tie on her today, she wasn't finishing out her races. She was coming there travelling well but not finding a whole lot off the bridle.Today with the tongue-tie she picked up well and went on.

“Tony warned me not to hit the front until the last and I do what he says. He likes them to come late, I sat as long as possible and she picked up, thank-God.”

There was no action taken or reports made to the stewards following the running of the race.