Condon & Lee on the mark with Aleef 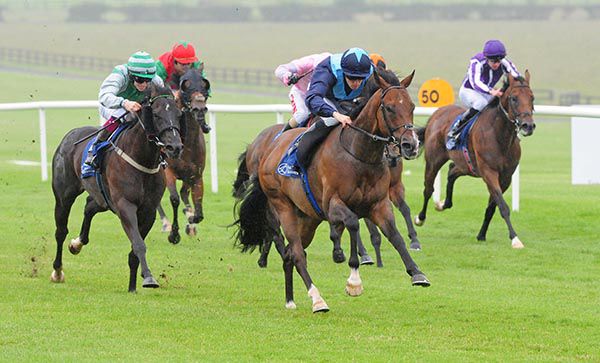 The Ken Condon trained Aleef registered his second success of the season, as he claimed the Irish Stallion Farms EBF Race.

A four time winner when trained in the UK, the son of Kodiac had his first start for current connections at Navan in March.

He since won at the Co Meath venue in May and was last seen finishing sixth of sixteen behind Buffer Zone at the Curragh on Saturday last.

Available at 10/1 this morning, the six-year-old bay gelding came in for plenty of market support and went off a 9/2 chance under Billy Lee.

Prominent throughout on the nearside, he was ridden over a furlong out and soon held a definite advantage, keeping on well from there to score by a length and three parts. Aloysius Lilius (18/1), who raced with the winner on the nearside, finished a good second under Nathan Crosse for Ger O'Leary, while the 9/10 favourite Julia's Magic was a disappointing fourth.

Condon, who trains the winner for the Cinco Partnership, said: "He won a lovely pot at Navan for us and he goes on most ground including the all-weather but he would have appreciated that little bit of rain we got this morning.

"He's hard running and just jumps and runs, and is a welcome addition to the team this year. He's won two and been placed a couple of times from six runs. If we had a few more like him it would be great."