Cross Counter to drop in trip for Goodwood Cup 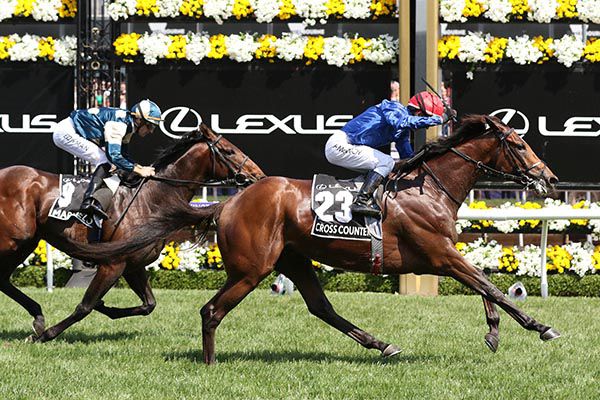 Charlie Appleby believes a drop down in trip will play to the strengths of Melbourne Cup winner Cross Counter when he renews rivalries with Stradivarius in the Qatar Goodwood Cup.

The Newmarket trainer will bypass an outing in the King George VI and Queen Elizabeth Stakes with the four-year-old in favour of a shot at the Group One prize on July 30.

After finishing fourth behind Stradivarius in last month’s Ascot Gold Cup, Cross Counter will seek to turn that form around and stop John Gosden’s five-year-old becoming just the second horse to win the two-mile contest three times after Double Trigger.

Appleby said: “Cross Counter has come out of the Ascot Gold Cup well, and the plan is not to run in the King George but head straight to the Goodwood Cup.

“We wanted to drop him in on his first time over the two-and-a-half miles. They went strong enough early on, but he was not in the best position when they got racing.

“He still showed plenty of class, the way he came into the race, and the drop back to two miles on a track he holds the mile-and-a-half course record on is positive.

“We are expecting an exciting race and we are pleased to be part of it — and if he turns up in top form he will be a major player.”

A return to Deauville may be on the cards, meanwhile, for stablemate Space Blues after he found only Too Darn Hot too strong in the Prix Jean Prat on Sunday — with Appleby earmarking the Prix Maurice de Gheest as a potential target.

He said: “Over the last few years, he would have been good enough to win a Prix Jean Prat, but Too Darn Hot turned up and he was always going to be hard to beat — but our fellow lost nothing in defeat.

“He is a tough little horse, and we might look at the Maurice de Gheest with him if he is showing the right signs because he has had a busy early part of the season.

Space Blues could still head back to France even if the Prix Maurice de Gheest comes too soon, with Appleby identifying the Prix de la Foret at ParisLongchamp as a potential long-term target.

He added: “If we decide not to go to the Maurice de Gheest we will work back from the Foret.

“We thought he might be a mile-and-a-quarter horse at the start of the season, and we started him over that trip.

“Needless to say, he is a typical Dubawi in that has got stronger and quicker now we have found his trip."