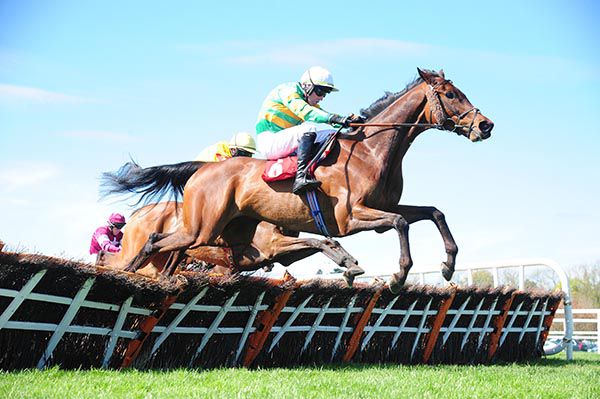 Crossed My Mind fended off Lakemilan and asserted in the closing stages of the Grade B handicap hurdle at Cork.

Lakemilan closed on Crossed My Mind at the last but couldn't match him on the run-in as he finished strongly close home to land the spoils by two and three quarter lengths.

The winner was returned at 8/1 from Lakemilan at 10/1. Another 8/1 chance, Lucky Icon came in third a further lengths adrift.

Trainer Arthur Moore said: "I had it in the back of my mind to go back for a hurdle and following his last chase run he was still a maiden, so it made sense to leave him a maiden over fences for next season.

"It was a nice pot, the race was the right trip and I couldn't believe he went out in the betting, as I thought he had a great chance.

"I'm delighted to get the win for JP (McManus) and Slippers (Madden) and it was needed! He is a sweet horse and he'll be a grand horse for chasing next season.

"There is a handicap hurdle over 2m4f on the Saturday at Punchestown but I don't know if he'd make the cut and it will be very competitive. We might let him and bring him back for Listowel next season."

He added "This has been a lucky track and I rode a double here on Easter Monday once; I got a puncture between Mitchelstown and Mallow and Tommy Wade stopped to help me.

Tommy was a big punter but I never said a word to him about the two winners so I wasn't too popular afterwards! Honest Willie Macauley was one and I can't remember the other horse."