Curran has dream ride on Yuften 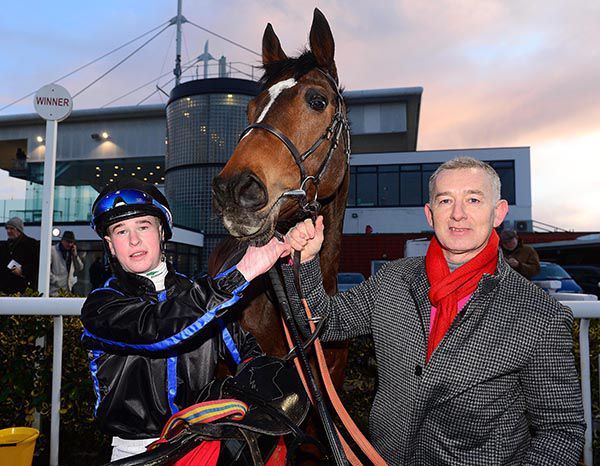 Yuften justified his short price when running out a very cosy winner of the opening Ace Casino Kildare Town Claiming Race at Dundalk this evening.

Dean Curran (19), from Kildare town, had a dream ride as he partnered his first winner aboard the 1/2 shot in the seven-furlong contest.

John Feane's charge, making it two from two since joining the yard, moved smoothly through to lead going to the furlong pole.

“It's brilliant, a dream come true,” said the winning rider.

“I thought he'd win but hadn't really convinced myself he would.

“I only started with John Feane a week ago and found out on Thursday that I'd be riding the horse so I was delighted to see my name down for him.

“Fair play to the boss as he had him in super order for me today.

“Turning in I was having to take him back and was just waiting for the moment to let him down. It was unreal.

“I was with Michael Halford before and he was good to me as well. I learned a lot there and the lads helped me a lot in the yard.”

Feane added:- “I’m delighted for Dean and he’s a good kid. I told him not to panic. He’s learning and all young lads need chances so we’ll try and give him a few more.

“James Mescall picked up this horse for 7,500 (at the Newmarket Horses In Training Sale) and he’s won two now quite impressive. He’s paying his way.”

Four horses were claimed after the race:-

Yuften (15k) and Best Not Argue (8k) were both claimed back by their connections. Art Of Unity (8k) was claimed to go in training with Feane and Hasselnott (7k) was claimed by Anthony McCann.