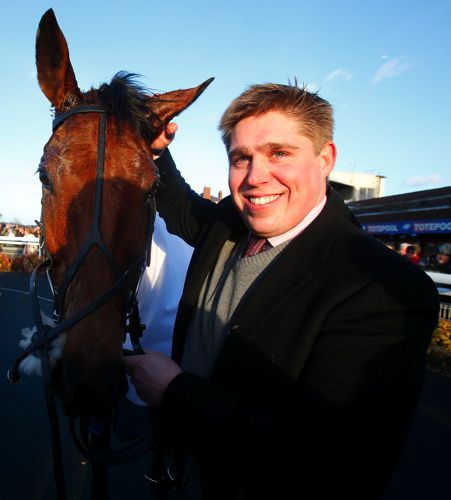 Only Martin Pipe had previously reached the milestone in Britain, doing so on eight occasions, but a six-timer on Easter Sunday saw Skelton join him in the record books.

Skelton said: "It's a marvellous way to do it, to have six winners on the day is incredible.

"It's been such a team effort, we’ve had loads of runners all season and it’s been a magnificent effort by all the staff, Harry (Skelton) and Bridget (Andrews) and all the other jockeys have been brilliant.

"I didn't think we'd do it. Back in the winter we didn’t even have our eye on it, but as we got to mid-March we thought we might give it a go.

"The horses have been in good form all year, it’s been incredible, all the team — the owners, the farriers, the vets, everyone. To achieve that number is quite remarkable.

"To achieve something that only Martin Pipe has previously done makes me feel very proud.

"It’s been an incredible season from everyone and I’m so proud of every single one of them.

"I set very high standards and targets, and for them to keep meeting them speaks volumes. They go racing day in, day out - it’s been an incredible effort and a remarkable season.

"We've also had the big winners at Cheltenham and Aintree to go with it, which we’re proud of.

"It’s been great to be a part of, racing is our passion, it’s magic."

The trainer spent nine years as assistant to Paul Nicholls before striking out on his own in 2013, with Willow’s Saviour a notable winner in his first season.

Skelton has since added a clutch of Cheltenham Festival wins, with Ch'tibello making it three County Hurdle wins in four years for the yard when triumphing in March.

The Skelton brothers - sons of Olympic showjumping great Nick Skelton — also enjoyed Grade One success at this year’s Festival when Roksana won the OLBG.com Mares’ Hurdle, a first win at the highest level for the prolific stable.

Nicholls was quick to hail his former assistant’s achievement in sending out a double century of winners.

He said: "I’ve just spoken to him and asked him why it took him so long as he had 80 or 90 winners by October!

"It’s a great achievement and I’m very proud of him.

"He gets stuck in and races horses all year round. He's probably had a lot of runners as he attacks at both ends of the season - racing on fast ground in the summer and then through the winter.

"He thrives on winners though, as does Harry, and he’s done very well. I’m really pleased for him and it’s a great achievement."

Harry Skelton was thrilled to help his brother hit the milestone and pointed to the Cheltenham Festival as a particular hightlight.

He told Racing UK: "I’m very lucky to be part of (his team). They all had good chances and we’ve done it here at Market Rasen, which has been a happy hunting ground for us since Dan started training.

"They’ve all been good (winners) — obviously Cheltenham was very special, the fact that Ch’tibello landed a long-term plan is again testament to the team and how good a job they’ve done and how well Dan mapped him out.

"That would definitely stand out with our first Grade One winner in Roksana. There’s many, but Cheltenham was the Olympics and to get Ch'tibello across the line was very rewarding."

Skelton had to skip a trip to Market Rasen due to family commitments, but his assistant Tom Messenger is full of admiration for his determination.

He added: "I’ve never met anyone as driven as Dan is, and it’s infectious through the whole team. He's just a winner and everyone jumps on board.

"We’ll have a good party tonight and I can’t tell you how close everyone is at home and how important this is - to everyone."