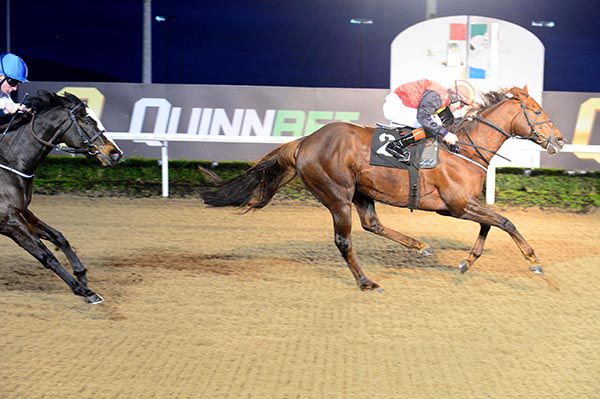 The Sheila Lavery trained Danz Gift gained a sixth career success at Dundalk today, all of which were gained over today's minimum trip at the Co Louth venue, in the opening Irishinjuredjockeys.com Handicap.

The son of Haatef had the inside draw in one and, under jockey Robbie Colgan, in the end wore down leader Ar Saoirse inside the final furlong to record a length and a half win over Snow Patch

Lavery, whose Lady Kaya filled runner-up spot in this year's Group 1 renewal of the Moyglare Stud Stakes at the Curragh in September, later commented “I love that horse!

“The race really fell for him because they went really hard. He's very good, and he's got a lot of speed, but if you've got to hold him up a bit he doesn't breathe, chokes himself and then doesn't see the race out.

“I don't think Robbie even got after him there because they fell apart and he just cruised through them.

“I said to Robbie if you don't miss the break by a heartbeat just drop your hands and if he ends up in front so be it.

“The minute you take a pull he just fights you and then it's game over.

“It's a shame there aren't a few more races for him. It seems to be when he hits that form he wins a few on the bounce. If I knew what I did to make him hit that form I'd be brilliant!”