Debut run does O'Brien's Road "the world of good" 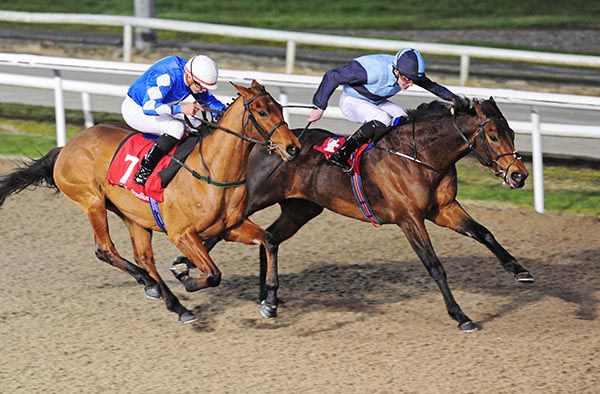 A beaten favourite on debut 119 days back, Jupiter Road (11s into 8s) struck on his second outing in the Irish Stallion Farms EBF Median Auction Maiden (Plus 10 Race) at Dundalk.

Trained by Joseph O’Brien and ridden by Shane Crosse, Jupiter Road did edge right, and had to survive a steward’s enquiry before being confirmed the head victor over Oneiroi (10s into 8s).

In a good sign for the front pair they drew on by four and a quarter lengths from the third home It’s Not Too Late.

A gamble on Marshall Law (13/2 into 3/1) went astray as he could manage only fourth after a front-running effort.

“We went a good strong pace the whole way. He was probably a bit disappointing first time out but we thought a lot of him,” said Crosse.

“He had a good break and it's probably made him for this run. He hit the front fairly soon but he put the race to bed which is the main thing.

“His first run did him the world of good and he was a completely different horse today. Hopefully it's onwards and upwards with him now.

“It's better to be improving than not to be. This is probably as short as he wants and he should get a mile and further.”

The Stewards enquired into possible interference in the closing stages involving Jupiter Road (GB), ridden by S.M. Crosse, placed first and Oneiroi, ridden by R.P. Whelan, placed second, where it appeared interference may have occurred.

Evidence was heard from the riders concerned, in the presence of Mr. J.P. O'Brien accompanying S.M. Crosse.

The Irish Horseracing Regulatory Board Veterinary Officer examined Jered Maddox (GB), trained by David Marnane, at the request of the Stewards and reported the animal to be post race normal.