Defi aims to double up at Cheltenham 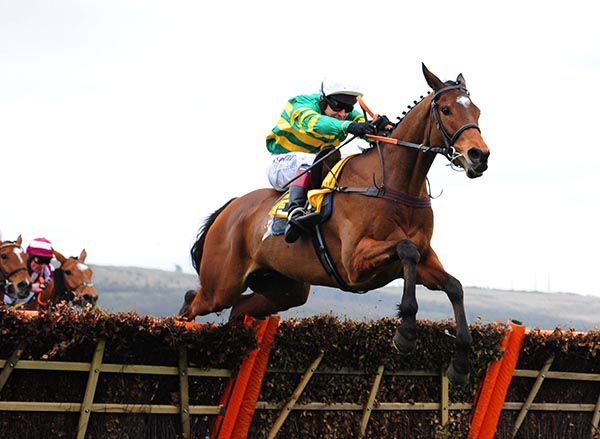 Defi Du Seuil will bid to maintain his progression over fences as he seeks a second Cheltenham Festival triumph in the JLT Novices’ Chase.

After landing the 2017 Triumph Hurdle, the Philip Hobbs-trained six-year-old will return to the scene of his finest moment in search of a fifth Grade One success on Thursday.

Despite suffering an inauspicious start over fences when trailing home last in an Arkle trial at the track in November, the JP McManus-owned gelding has steadily improved and claimed a first top-level success over fences at Sandown last time out.

Frank Berry, racing manager to JP McManus, said: “Defi Du Seuil is in great form, and Philip Hobbs is very happy with him.

“The Arkle did cross our minds a bit, but I think everyone was happy to let him run in this race.

“I think the horse is learning and getting the hang of it over fences now, so let’s hope he can get another clear round.

“Barry (Geraghty) knows the horse well enough, so he will see how the race pans out and make a plan. It does look a good race — but we are hoping for a big run.”

Connections of the Colin Tizzard-trained Lostinstranslation are hoping a return to Cheltenham can help him repeat his defeat of Defi Du Seuil at the track on New Year’s Day, and exact revenge for his Sandown reversal behind his old rival last time out.

Joe Tizzard, son and assistant trainer, said: “His form has been faultless all season. He was beaten by Defi Du Seuil last time, but he goes there in good form.

“I’d a hope a return to Cheltenham will help him, while the slower ground will help — because we know that stamina is his forte.

“We will leave tactics to Robbie Power — he knows him inside out, because he has ridden him in all of his starts apart from last time.

“It will be competitive, and he won’t get a soft lead. His run in the Scilly Isles was at the perfect time, b ecause it gives him five or six weeks until this race.”

Ben Pauling is optimistic that Kildisart can make his presence felt if translating his form at home to the track, and backing up his last-time-out victory at the course.

The Bourton-on-the-Water handler said: “If he turns up in top form he could be there or thereabouts in a top race.

“He is in fabulous form — and at home he is in good a form, as you would hope. He hasn’t got to find much with the others.

“The two at the top of the market have taken each other on a few times, and they are where they are. I hope, if we are improving, we can catch them.”

Willie Mullins will fire Voix Du Reve, Real Steel and Pravalaguna at the two-and-a-half-mile race in his quest to secure the prize for a fifth time.

Patrick Mullins, son and assistant trainer, said: “Real Steel has put in a couple of impressive performances on his last couple of runs.

“This is a step up, but he’s always had a lot of ability — and he’s in good form.

“Pravalaguna probably needs to step up on what she’s done so far, but she’s going into the race in good form.

“Voix Du Reve is very interesting. He might have won the Fred Winter here a few years ago but for falling at the last, and I think the step up in trip will be no harm to him.”