Deidra has the know how and it shows 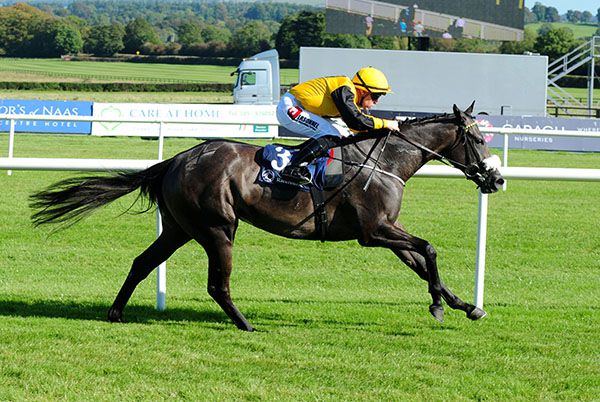 A couple of withdrawals at the start saw the Irish Stallion Farms EBF (Fillies) Maiden at Naas go off over three minutes late. That mattered little to connections and backers of Deidra (7/2 into 5/2) as she came home a length and three parts in front.

Hundred to one shots Miss Sassyboots and Wee Diamond had to miss out after playing up at the gates, and it was ultimately the most experienced in the line-up, Deidra, that put her know how to good use.

Jessica Harrington’s newcomer, Allez Allez Allez and favourite, Sunday Sweet got closest, but for Michael O’Callaghan and Leigh Roche Deidra convincingly saw them off by a length and three parts and half a length.

“She’s had a few nice entries including the Moyglare and has just taken a while to come to hand. She’s a big filly that we bought at the Breeze Ups and has always worked like a good filly but has taken all her runs to get her straight. That experience stood to her today," said O'Callaghan.

“I knew at halfway that she wasn’t travelling that well. She hated the ground and Leigh confirmed that as she wants a bit of cut in it. She’s genuine, has a bit of class and she just got through it today.

“I think she can keep improving and maybe get a bit of black type. She bumped into one the last day (Nurse Barbara) and has improved again from that to today. I think going seven or a mile next spring she could be a nice filly.

“She might run in the seven-furlong Listed race at the Curragh in a few weeks or maybe the Bosra Sham at Newmarket.”

The Stewards informed Brian Nolan, trainer that Wee Diamond, would have to be recertified before being declared to run from stalls again.

L.F. Roche, rider of Deidra trained by M.D. O'Callaghan, reported to the Clerk of the Scales that his mount leaned left in the straight.

The Stewards informed Shane Nolan, trainer that Miss Sassyboots, would have to be recertified before being declared to run from stalls again.

The Stewards enquired into an incident approximately one and a half furlongs from the finish involving Deidra, ridden by L.F. Roche, French Secret ridden by A.J. Slattery, Rosemill ridden by G.P. Brouder, Sunday Sweet, ridden by C.T. Keane, and Wild Cherry ridden by B.M. Coen, where it appeared French Secret checked. Evidence was heard from the riders concerned. Having viewed the recording of the race and considered the evidence, the Stewards took no further action.