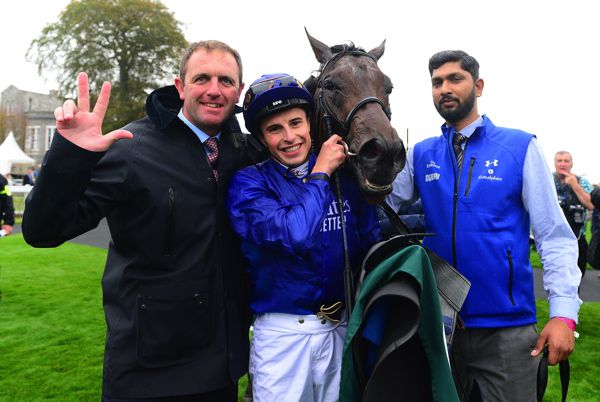 All eyes will be on Pinatubo when Godolphin’s brilliant youngster bids to cement his position as Europe’s champion two-year-old with victory number six in the Darley Dewhurst Stakes at Newmarket on Saturday.

The Shamardal colt has carried all before him in his five races to date and has just been getting better and better.

While his win in the Woodcote Stakes at Epsom on Oaks day marked him down as very promising, Pinatubo has developed into one of the best two-year-olds in recent memory, with impressive performances to take the Chesham Stakes at Royal Ascot, Goodwood’s Vintage Stakes and the National Stakes at the Curragh.

That latest triumph, by nine lengths, will not be forgotten in a hurry. The handicapper was duly impressed and gave him a rating of 128 — 2lb higher than Frankel as a juvenile and the highest since Celtic Swing in 1994.

However, at Moulton Paddocks in Newmarket, where he is stabled, he is easy to forget, as trainer Charlie Appleby explained.

“At home he has been a pleasure to be around,” said Appleby.

“Thankfully he turns up with his A-game on raceday.”

Positive was beaten five lengths into second place by Pinatubo at Goodwood — but his trainer Clive Cox believes his colt can get closer this time following his victory in the Solario Stakes at Sandown.

He said: “Positive has done really well since he won the Solario. He had a proper race that day and also impressed us very much when coming up against Pinatubo on his previous run.

“Like everyone else I have been extremely taken with Pinatubo, there’s no disputing his quality, but I am hopeful that Positive can show the necessary improvement to close the gap to him.

“We have had a dry summer, so my opinion may be based more on theory than fact, but I would like to think that Positive will be at home on the type of easier ground he is likely to encounter on Saturday.

“The Dewhurst is a benchmark race which points forward to next year’s Classic contenders and, while I appreciate it is a hot contest again this year, I am very happy that I have a colt good enough to be in the line-up.

“My only two previous runners have both been placed (Kodi Bear was second in 2014 and Xtension third in 2009) and Positive is a nice horse who is still on an upward curve.”

Aidan O’Brien fields four of the nine runners in search of a seventh Dewhurst triumph.

His team includes Coventry Stakes winner Arizona, who was third to Pinatubo in the National Stakes, while Monarch Of Egypt bids to bounce back after a disappointing run in the Middle Park Stakes won by Godolphin’s Earthlight.

Ryan Moore’s mount Wichita was a seven-length winner of the Tattersalls Stakes over the course and distance a fortnight ago which led to him being supplemented.

Year Of The Tiger, fourth in the Royal Lodge Stakes, completes the the Ballydoyle party.