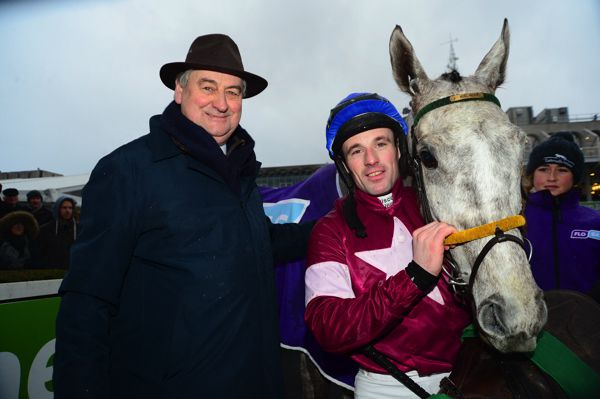 Disko could make his long-awaited reappearance in the Savills Chase at Leopardstown on December 28.

The Noel Meade-trained grey has not run for over 12 months and fractured his skull and wither in a stable accident earlier this year.

But the Gigginstown House Stud-owned seven-year-old joined stablemate Road To Respect in a racecourse workout on Sunday, with both horses pleasing their trainer and in contention for the Grade One feature at the Dublin track.

Meade said: “Disko and Road To Respect both worked after racing at Navan. Sean (Flanagan) was on Road To Respect and Jonny (Moore) rode Disko. They just jumped a couple of fences and all went well.

“Disko has been working well at home and is coming along nicely. Nothing has been decided for him yet and I’ll have to talk to Eddie and Michael (O’Leary), but he could run at Leopardstown along with Road To Respect.”

Disko was last seen winning the Grade Two MyCarNeedsA.com Chase at Down Royal in November last year, having taken Grade One honours in the Growise Champion Novice Chase at the Punchestown Festival and finishing third to Yorkhill at Cheltenham.

Meade’s charge also struck at the top level in the Flogas Chase at Leopardstown.

Road To Respect, meanwhile, landed the JNwine.com Champion Chase at Down Royal last month, the third Grade One success of his career.