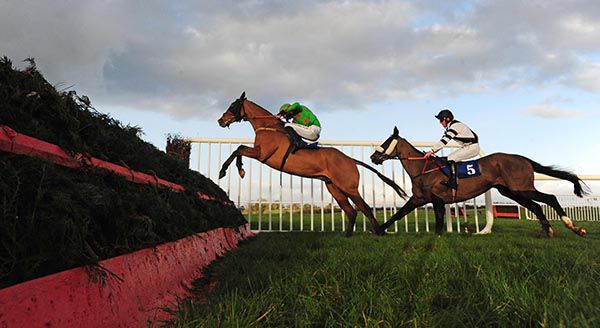 Double Portrait landed a gamble and in the process continued a good recent run for rider Danny Mullins in the Watch RacingTV With Free Trial Now Handicap Chase at Thurles.

The Stephen Mahon-trained gelding was backed this morning at all rates down from 14/1, and was sent off at just 4/1 in this 2m5f event.

Mullins, who partnered Agusta Gold to land a valuable handicap for his mum Mags at Navan yesterday, was again riding at a light weight and this made it five wins in the space of just ten days.

The seven-year-old gelding led approaching the last and went three lengths clear on the run-in but ultimately just held on by a fast diminishing neck from the staying on Teacher’s Pet. Surf Instructor was two and a quarter lengths back in third.

Mahon said, "The horses in the last three months have had dirty noses and I haven't been to the doctor myself in 50 years, and I still didn't go, but had a bad dose since Christmas. Between the horses and myself not being well, it was hard the past couple of months but thankfully Tom and Martin (Doran) have had the confidence to wait and some of the horses are still not right.

"I actually had Sanibel Island backed myself and he was just getting into it nicely when he tipped up.

"The penny is starting to drop with him and Danny said he'd win again.

"It's grand for Tom Doran who has eight horses with me, including some young horses to be broken later in the summer."

There was a sting in the tail for Mullins who was later given a four days suspension for using his whip with excessive frequency and down the shoulder while in the forehand position.