Double for Hayes as All's Quiet takes the last 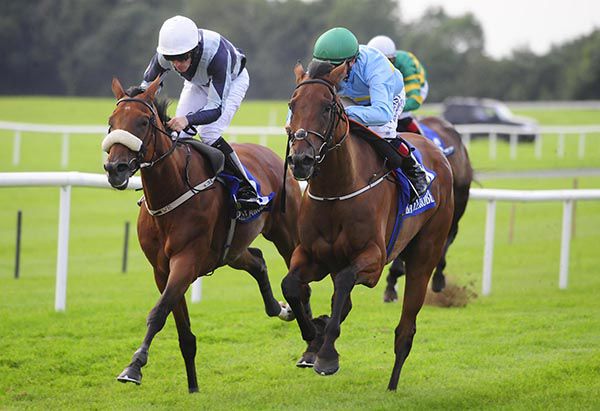 Chris Hayes completed a first and last race double at Ballinrobe, as All's Quiet just got up to claim the concluding Win Big With Tote Maiden.

Fifth to Miss Mardan over the course and distance last month, the son of Westerner was last seen finishing fifth to Swamp Fox over flights at Killarney on Thursday.

Back on the level this evening, he was available at 16/1 this morning, opening on-course at 7s, before going off an 11/2 chance.

Settled in third, he went second over three furlongs out, and was soon ridden in pursuit of the leader.

He gradually reduced the deficit from the furlong pole, getting up on the line to prevail by a short head.

The front-running 3/1 joint-favourite Bibliotheca (12s this morning and from 4s on-course) was the one just denied, and she had to settle for second under Billy Lee for Willie Browne. Princely Conn (5/1), Niall McCullagh aboard for Tom Mullins, completed the placings another four and three parts of a length back in third. High Tide was the other joint-favourite and he finished a disappointing seventh.

"He ran well then over hurdles at Killarney last week and he'll go for a handicap hurdle at Galway."

D. O'Brien, rider of High Tide, trained by Joseph Patrick O'Brien, reported to the Stewards' Secretaries that his mount did not pick up and stayed on one-paced in the straight.