Doyle delighted to get a win on Soprano's card 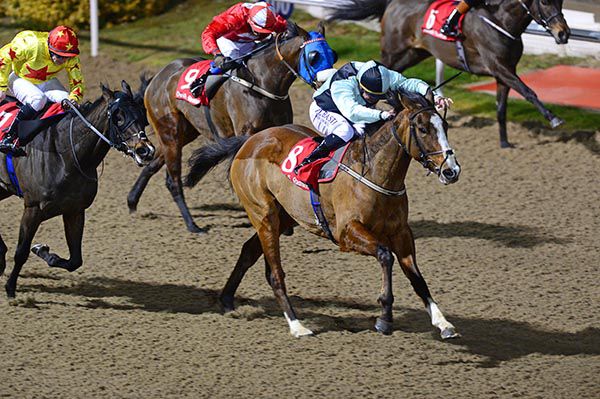 The 63-rated Spanish Soprano (7/2 into 9/4 2nd favourite) came good at the 11th attempt in the Crowne Plaza Dundalk Race & Stay Fillies Maiden. Pampushka (5/4 favourite) disappointed in fourth whilst up front Spanish Soprano got the better of Proud And Elated by a length and a quarter with three parts of a length to Stranagone in third.

Shane Foley rode Spanish Soprano for owner/breeder Jim Monaghan and trainer Tim Doyle and the daughter of Lope De Vega tracked the leader, and she was second at the halfway stage.

Pushed along two furlongs out and ridden to lead a furlong out, Spanish Soprano kept on well inside the final furlong for the win.

“It's great to win a maiden with her. She's a full-sister to Spanish Tenor, who was Group 3 placed,” said Doyle.

“It's great to get a win on her card and she's coming to herself, every run is better than the run before.

“She ran well here last time and I think she's come on for that run. She's a big filly and I'm hoping she'll keep progressing.

“Shane said she loves that surface so we'll give her another run here and then see about the Turf after that.”

D.E. Sheehy, rider of Fairy Tango trained by Sarah Lynam, reported to the Clerk of Scales that his mount was slowly away from the stalls and at a later stage hung left in the straight.