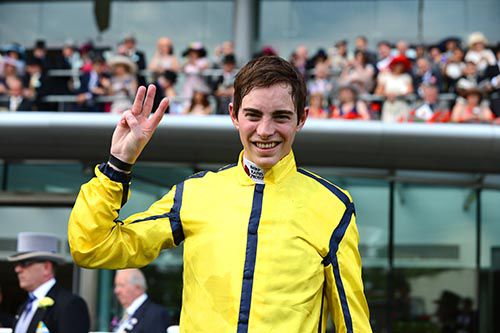 James Doyle will be hoping his feature-race victory aboard Glorious Journey in the Unibet Hungerford Stakes at Newbury on Saturday is a sign of things to come at York next week.

The 31-year-old, who will partner favourite Crystal Ocean in the Juddmonte International on the Knavesmire on Wednesday, warmed up for his big-race ride in perfect fashion, steering the Charlie Appleby-trained four-year-old to glory in the Group Two contest.

Kept in a prominent position throughout the seven-furlong affair, the well-supported 100-30 shot moved into a lead he would not relinquish inside the final quarter-mile, before defeating the returning Librisa Breeze by half a length.

Doyle said: “We thought quite a bit of him as a two-year-old and he has got a fantastic pedigree. We just lost him a little bit, I think dropping back in trip was Charlie’s idea and it has been the making of him. We dabbled at six, but seven furlongs is perfect for him.

“I hit the front too soon, but Donjuan Triumphant didn’t take me far enough, I tried to hang on to him as long as I could and I was a little bit nervous if he’d have the tenacity to hold off Librisa Breeze, but that was a sure sign of him growing up.

“There is lot more to look forward to and I guess something like the Foret would be perfect for him.”

Echoing the thoughts of Doyle regarding a trip to France and a step up to Group One company for a shot at the Prix de la Foret at ParisLongchamp was assistant trainer Alex Merriam.

He added: “He ran respectably in the July Cup, but I think the ease in the ground helped him today. He was dropping back in class and seven is ideal, so it just worked out for him.

“His two early runs were pretty impressive and you couldn’t knock him, so on the bare form it looked like he had a squeak.

“James said he travelled nicely into the race and he kept it nice and easy. I think he (Appleby) has mentioned the Foret so we would stick to seven and hopefully we would get a bit of ease in the ground over there.”

As for the runner-up, his trainer Dean Ivory was delighted to see him return to form and fill the same position he did in the race in 2017, on his first start in 280 days.

Ivory said: “I was really pleased. He has been off for such a long time. We have been so patient, not just me but me, my staff and Mr (Tony) Bloom.

“We have found our ground and got him back to being about right. If it had been his second run and he’d been drawn on the stands side that extra length I think he might have got today.

“It is about getting the confidence back in the horse. He walked around the parade ring like a kid and he thoroughly enjoyed himself today.”