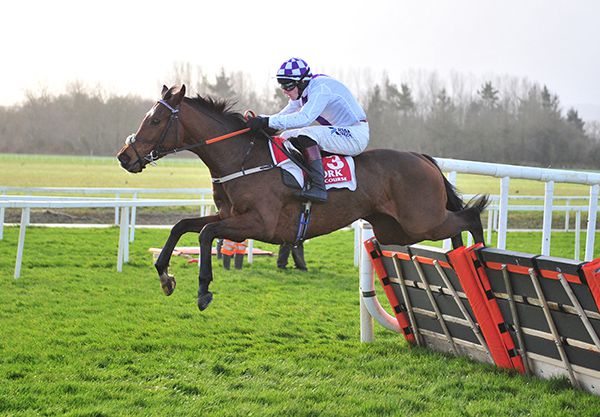 Clemencia (as big as 33s in the morning, 10/1 into 8/1 on track) was a convincing winner of the Galtee 3-y-o Maiden Hurdle under Ricky Doyle.

Always prominent, the gelded son of Pour Moi, in a first-time tongue-tie, led from halfway and left the 2/5 favourite toiling from three out. The winner galloped out strongly to score by fifteen lengths, with the odds-on favourite just lasting home for second from Politicise (22/1).

A five-race maiden on the Flat, Clemencia had run well in a Killarney handicap that worked out well in August and later that month was sixth on his hurdling debut at Down Royal.

"He is certainly a Triumph Hurdle horse without any question or doubt, said winning trainer Brendan Duke.

"I was heart-broken the first day in Down Royal and I thought for the first day at the races he didn't get a very sympathetic ride. I did expect him to win, I'm not going to tell that I didn't, but there was also a horse running away upsides him.

"I'm lucky it's coming up to Christmas and I'm off the hook with Jim (Bolger, owner)! He is like the trainer, big and backward and will take time and this is a nice horse and with a little bit of luck you'll hear plenty more about him.

"He has been schooling him since last January and the lads at home did a great job with him. He is talented and just needs to be lucky in his life.

"Jim likes going to Leopardstown at Christmas but I might keep him until the Dublin Racing Festival instead.

"It's odds-on now Santa will come."