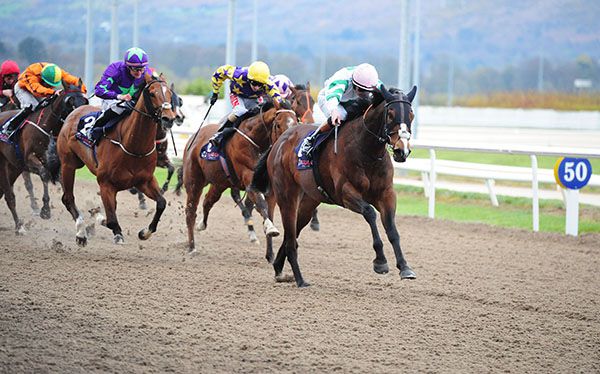 Half-an-hour on from his success on Wild Shot Oisin Orr doubled up in the Marshes Shopping Centre Ladies Day Sunday 14th April Handicap aboard Alfredo Arcano at Dundalk.

Only 43 days on from his latest outing, which came in Dubai, the David Marnane-trained Alfredo Arcano turned up in tip top shape to account for Lily's Prince by a length and three parts.

“He's a very good horse. He's just so much better around a bend and on the all-weather,” said Marnane.

“I know he ran really well in Dubai, when he was beaten a couple of short-heads on the opening night.

“He got a stone bruise two weeks after that and we were on the back foot over there.

“I was delighted with his first run and he could be a horse for the dirt there next year. He's a 100 plus horse now. We didn't chance him this year.

“We'll go back to Lingfield now and it could suit him well. Kachy will be hard to beat but you can't be afraid of one horse.

“He'll run in the big handicaps throughout the year but I think long term he could be a horse for the dirt in Meydan next year and we'll have to train him for it.

“I didn't want to step off the plane this year and go changing our plan to do it.