Dunkirk bids to get off the mark at Dundalk 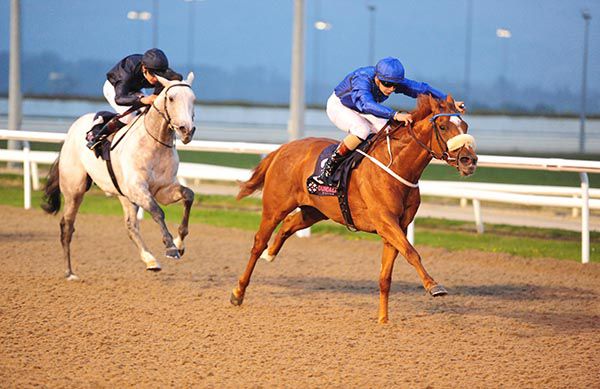 Dropping back to a mile can see Dunkirk Harbour get off the mark in the Irish Stallion Farms EBF Maiden in Dundalk on Wednesday evening.

Aidan O'Brien's colt was all the rage for his first crack at an extended mile-and-a-quarter maiden at this track last week, but was outgunned by Pearlman at the business end.

He has the strongest form in the book of the eight runners and first-time blinkers could eke out a bit more from him.

This colt is by War Front out of Galileo mare Marvellous who won the Irish 1,000 Guineas, so it will be fascinating to see how he fares on debut. Carefully a sister of Fort Myers, contests the Crowne Plaza Dundalk Race & Stay Fillies Maiden for O’Brien and can step up on previous efforts now that she tries Polytrack. Kasbah steps up to a mile in the Irishinjuredjockeys.com Claiming Race after winning over six furlongs in the same grade last week.

Considering this is a new trip, on his 59th start, he could be vulnerable to the higher-rated Weekend Offender who visits Dundalk for the first time. Treasure Vale was very heavily backed in Gowran Park before finishing third and it will be interesting to see if the money comes for him in the LMFM Dual Race Night Friday 3rd May Handicap.

The L'Isle De France Take Away Dundalk Handicap features a rematch between Lyrical Attraction and Esprit De Lumiere who were separated by a neck earlier this month.

The latter is tipped to get his revenge with a 2lb pull in the weights.

A full field of 14 are due to go to post for the Fundraise At Dundalk Stadium Handicap, in which Red All Star could exploit a lowly mark.