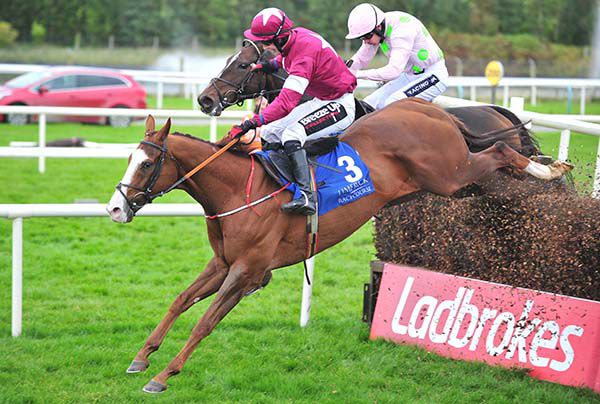 The Dunnes Stores Ladies Open at the Brosna Foxhounds point-to-point in County Offaly on Sunday has attracted a top quality field headed by On The Fringe.

A marvellous servant to J P McManus and Enda Bolger down the years, On The Fringe is now a fourteen-year-old, and he last appeared when victorious in a Listowel hunter chase in June.

The Exit To Nowhere gelding famously landed the Cheltenham, Aintree and Punchestown treble for two years in succession, when he dominated the hunter chase scene in 2015 and 2016.

If Bolger's veteran does line-up on Sunday, it will be his first start in a point-to-point since a rare foray 'between the flags' in December 2017. Of course he started in that sphere with a third placing at Dromahane, way back in December 2009.

Irish Grand National possible Fenno's Storm also has an entry at Durrow, fresh from doubling his score in the Tetratema Cup at Gowran recently.

An Irish Grand National hero of the past, Thunder And Roses, is also in the mix, along with a big name from this discipline, Pat Doyle's Sydney Paget.

In a nice piece of symmetry, Attribution, a Grade Three victor in his time for Gigginstown House Stud and Henry de Bromhead, could be back to the scene of his debut win, which occurred here in a four-year-old maiden in March 2014.

Now at the age of nine, and picked up for the Knockalough Syndicate last September at the sales for 18,000 pounds, Attribution will endeavour to get back on track, having lost his form in recent appearances.

"He won't run until there's some reasonable ground. He's a contradiction to what most of us were looking for all winter," said Dreaper on the half-brother to 2009 Champion Hurdle winner Punjabi.

"I think it's to be a mostly dry week but I'd say at best it'll be soft or tacky ground.

"He'd be an okay horse if he came back to his best. He'd been very busy and he didn't cost a lot of money so the lads took a chance on him.

"If we could sweeten him up at all there should be a tune in him somewhere but that open division is very strong this year.

"He's ready to have a run — we just need some reasonable ground."