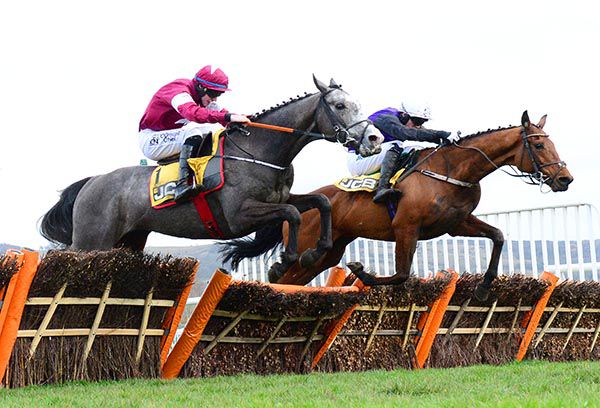 Farclas, near side
© Photo Healy Racing

The Gigginstown House Stud-owned Farclas has struggled against his elders since claiming Cheltenham Festival glory in last season’s Triumph Hurdle, most recently finishing down the field behind esteemed stablemate Apple’s Jade in the Irish Champion Hurdle at Leopardstown a fortnight ago.

He must concede weight to each of his six rivals in this Grade Three event, but Elliott is hoping his charge — who is fitted with blinkers for the first time — can make the most of having his sights lowered.

“Farclas has been disappointing this season, but we’ll see what happens,” said the Cullentra handler.

“It’s never easy for those good juveniles when they have to take on their elders, and Farclas has had to take on Apple’s Jade in two of his three races this season, but this looks a potentially nice opportunity for him.”

Coeur Sublime would have gone close to winning a Grade Two prize at Leopardstown over Christmas but for falling at the final flight.

He receives a handy age allowance this weekend as Elliott aims to get his season back on track before a possible tilt at the Triumph Hurdle at Prestbury Park next month.

Elliott added: “We’re anxious to get a run into Coeur Sublime before Cheltenham, and there aren’t too many options left for him — which is why we’ve put him in here.

“Touch wood, he’s fine after his fall and has jumped well at home.

“You never really know until you get them back on the track again, but I’ve been happy with him over the last few weeks.”

Forge Meadow began this season over fences before reverting to the smaller obstacles and was last seen finishing fourth behind the high-class Espoir D’Allen in the Limestone Lad Hurdle at Naas.

Harrington said: “Forge Meadow won the race last year, and it made sense to bring her back to Gowran Park again.

“She would probably like the ground to be a bit softer than it is, but she hasn’t really run a bad race all season.

“We’ve had to take her back from jumping fences, and this was a nice race to go for — so we’ll hope for the best.”

Colin Kidd’s stable star Rashaan makes his first appearance over hurdles since winning at Down Royal in September 2017.

The seven-year-old was last seen finishing fourth on the Flat at Dundalk, before which he had refused to race in the Drinmore Novice Chase at Fairyhouse.

Kidd said: “He wasn’t 100 per cent in love with jumping fences, and I think that was the main problem before the Drinmore — that and the fact we put some cheek pieces on him, because he didn’t like those at all.

“He’s a better hurdler than a chaser, and he’s in great form at home, so I hope he’ll run a nice race.

“He had a nice prep run on the Flat at Dundalk. He’ll improve for that, because he’d only been back in training four weeks after having a break.

“It’s our local track — it’s only 10 minutes down the road — and there’s some great prize-money on offer, so why not have a go?”

Paul Gilligan’s Glamorgan Duke and the Tom Mullins-trained Cristal Icon are the other contenders.