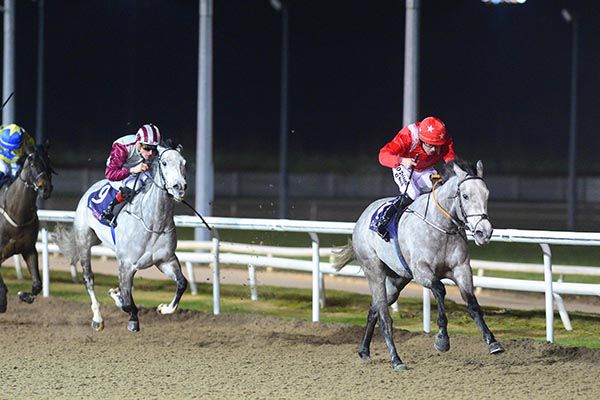 Paris Duvet got off the mark at the eleventh attempt as Henry de Bromhead’s 61-rated filly won the Crowne Plaza Race & Stay Maiden in the colours of the Waterford trainer’s wife Heather at Dundalk.

Confined to riders who had not ridden more than ten winners under any N.H. Rules or Rules of Racing from 24th March, 2019 to 17th December, 2019 inclusive, this mile event provided a welcome opportunity to some in the weigh-room.

Mark Enright seized his chance nicely on the grey, and she beat another grey of the fairer sex, Annie B by two lengths.

“I haven't actually rode for Henry since winning on Due Reward and hopefully he'll give me a few more now!” said Enright.

“I've missed most of the racing since and this is nice on my first night back since the Troytown.

“I got a fall in the Troytown and had to get a little operation on my stomach. I wasn't able to eat much for a while so nine stone wasn't too much of a problem tonight.

“Henry likes his horses ridden positive and she had plenty of experience, plenty of runs in handicaps.

“He just said to ride her as a find her, handy away, and she was good. She got across to the rail, Henry's horses are very fit and I knew once I got to the two pole that I could get after her and she kept going to the line.

“The mile was a bit an unknown really, she had one go over it. It was a weak maiden but she did it very well.”

S.B. Kelly, rider of Accept trained by Adrian McGuinness, reported to the Clerk of Scales that his mount got tight for room after a furlong had been run.

Furthermore they informed the trainer that Magic Charm would be ineligible to run until the error is corrected to the satisfaction of the IHRB Veterinary Officer and any period of suspension imposed has expired.