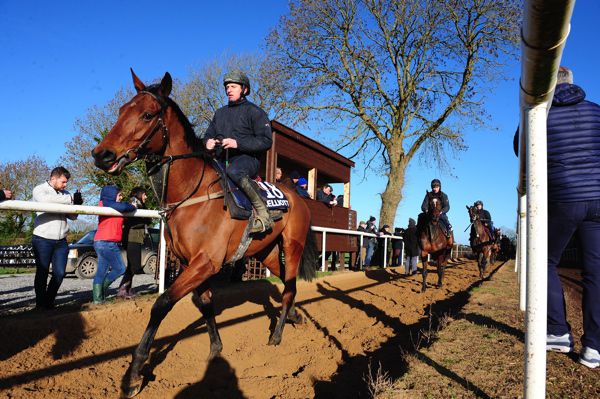 Envoi Allen will carry the familiar colours of Cheveley Park Stud into battle at the Cheltenham Festival in the Weatherbys Champion Bumper.

The easily identifiable red, white and blue colours have been seen claiming victory in some of the biggest races on the Flat by greats such as Medicean, Pivotal and Russian Rhythm.

This season the stud has branched out into the National Hunt arena, enjoying particular success in Ireland and specifically with their bumper horses.

Envoi Allen was snapped up for £400,000 after winning an Irish point-to-point last February, but is looking a sound investment after winning each of his three bumpers for Gordon Elliott — completing his hat-trick in a Grade Two contest at Leopardstown earlier this month.

Cheveley Park’s managing director, Chris Richardson, said: “As things stand, the plan is to run Envoi Allen in the Champion Bumper — as long as all is well between now and then.

“He’s a good-looking horse, and I thought he was impressive at Leopardstown.

“The way he ran set it up for the others to come and tackle him, but he was really tough and galloped all the way to the line.”

Envoi Allen is set to spearhead a small but select team of Cheveley Park-owned horses at Prestbury Park next month.

Richardson added: “Envoi Allen will be our flag-bearer at Cheltenham this year, and there are a few others we’re still not sure about.

“The Fred Winter would look the logical race for Chief Justice, while A Plus Tard could go for the Close Brothers (Novices’ Handicap Chase).

“It’s not all about Cheltenham this year — we’re looking to the future — and we only want to take horses we think will have a chance.”

One notable absentee from the Cheveley Park squad bound for the Cotswolds will be another Elliott inmate in the exciting Malone Road.

Another expensive purchase at £325,000, the Kalanisi gelding was ante-post favourite for the Champion Bumper himself following dominant victories at Down Royal at Punchestown.

However, he suffered a setback before the turn of the year, and Richardson is unsure whether he will run again this season.

He said: “Malone Road definitely won’t go to Cheltenham. There is a chance he could go to Punchestown at the end of April, but we’ll see.

“He is a horse they rate extremely highly, and it could be that we treat him like the good horse we think he is and give him plenty of time.

“He’s only five and he’ll be an even better horse next season, hopefully.”