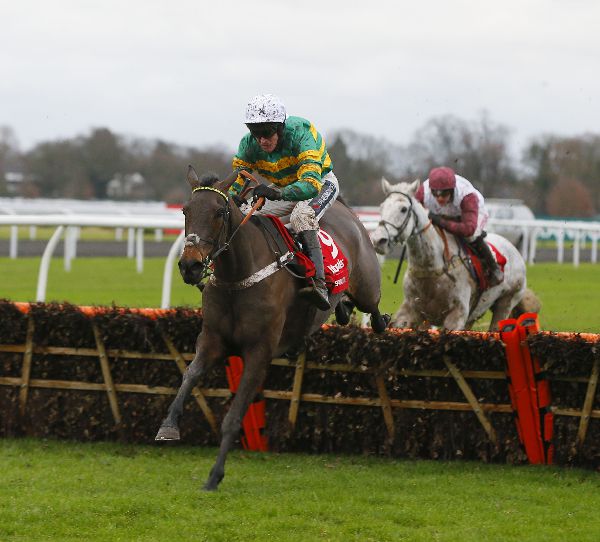 Epatante proved herself a mare out of the very top drawer with a hugely impressive display in the Ladbrokes Christmas Hurdle at Kempton.

The JP McManus-owned five-year-old disappointed when hot favourite for the mares’ novices’ hurdle at last season’s Cheltenham Festival, but dominated her rivals on her seasonal reappearance at Newbury last month — earning her this sharp rise in class.

Trainer Nicky Henderson fielded three runners in all as he went in search of a record ninth victory in the race, with 2/1 joint-favourites Epatante and Fusil Raffles joined by the defending champion Verdana Blue.

While Fusil Raffles was a spent force before the home turn, Barry Geraghty was still pulling double aboard Epatante and she shot clear once given her head to seal a five-length success.

Henderson said: “I’ve got to say I was a Fusil Raffles fan, but she (Epatante) was impressive. I’ve even got to admit it myself — she was very good.

“We’ve come straight from the Gerry Feilden at Newbury, which was a handicap. I wanted to go to Ascot last weekend, but JP wanted to come here and he was absolutely dead right.

Paddy Power make Epatante their 7-2 favourite (from 16-1) for the Champion Hurdle at Cheltenham in March.

Henderson added: “She is lovely and has a great temperament with a lovely attitude and she is a great jumper. I saw Barry for 30 seconds after the race and I said, ‘what next?’. He said ‘win the Champion Hurdle’, so I suppose that is what I better do!

“Does she need to do any more before then? I don’t know. We will think about it.”

Of his other runners, Henderson said: “Fusil Raffles was a bit keen and over-raced, but Verdana Blue has run a fantastic race. That is the best race she has run in soft ground and she might be going on her travels — there is a race in February over a mile and seven (furlongs) that is worth two million (in Saudi Arabia), but she has to get in.”