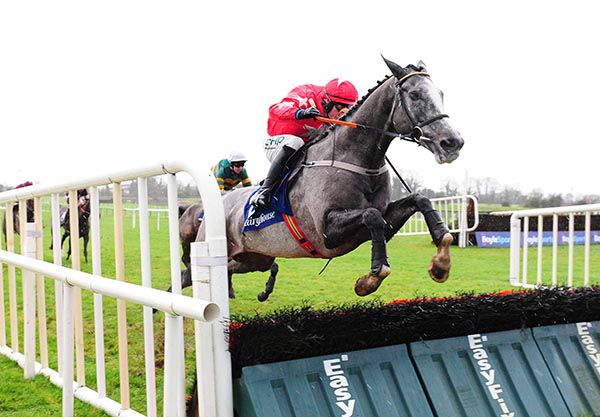 Dual bumper winner Dunvegan made a winning seasonal reappearance at Fairyhouse today as the Pat Fahy trained gelding landed the BoyleSports BetBuilder Maiden Hurdle and helped Paul Townend re-establish a three winners lead at the head of the Jockeys' Championship.

The keen going son of Le Havre was a winner at the Punchestown festival on his previous start in a winners' bumper last April and today reappeared in excellent health when making all. Dunvegan comfortably had the measure of School Boy Hours when that rival fell at the final flight, bringing down favourite Column Of Fire and the winner eventually scored by seven and a half lengths from Swordsman

Fahy later stated “what more could he do. He was a good horse last year and it was just a matter of him coming back and showing it.

“He did nothing wrong last year. He just had one run where he starting to thrive, I was delighted watching the weight going on but he blew up in the Grade 2 at Leopardstown. Other than that he's never let us down really.

“He was going to win today regardless of what happened at the last and he will come on from the run. I'm happy to have that out of the way.

“He's not just a big old jumper, he can flick them as well. We have him in the Grade 1 at Naas in January and we might have enough time between now and then. That seems a nice gap.

“I can't wait for him to go chasing. We schooled him as a three-year-old because he was going point-to-pointing, upsides handicappers and he was putting them away — he was unreal.”

The win moves Townend back three winners in front of Rachael Blackmore, who won the earlier race on Havingagoodtime with the score now 68-65.