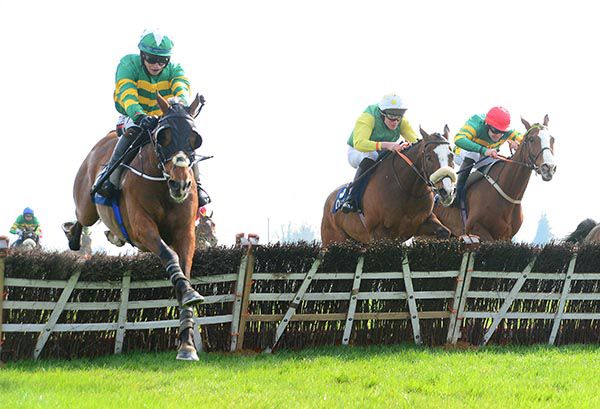 Ivanovich Gorbatov secured his first victory for over three years in Fairyhouse's Grade A handicap hurdle.

He took a narrow lead at that flight and was soon shaken up to go and win his race.

The seven-year-old gelding responded and drew three lengths clear coming to the last.

He wasn't for stopping on the run-in as he put Tudor City away by two and a half lengths at 11/1.

The runner-up was an 8/1 chance. He came in two and three quarter lengths in front of Hearts Are Trumps (12/1) with 9/1 shot Cut The Mustard fourth.

Joseph O'Brien said: “They went quick and he enjoys that. He travels and he jumps very well.

“He probably got there a little bit sooner than ideal but he got a good jump at the last and that probably finished it for the rest of them.

“JJ gave him a great ride, he's been riding the horse and he knows him well. You have to take a chance, go down the inside, cover him up and have a go late.

“Things fell his way today, it's a lovely pot and I'm delighted for JP (McManus).

“He loves having cover, he loves good ground and a strong pace. When things fall his way he's a good horse and when things don't go his way he tends to sulk a little bit and he gives up. Thankfully today things went his way.

“He was working well but you don't know what you're going to get with him.

“JJ gave the horse a fantastic ride. He's strong as an Ox. He's a big help to us, he works every single day schooling and you name it.

“Obviously we get on very well. He knows how we like the horse ridden and he gets the job done.”

Ivanovich Gorbatov's last success came over Apple's Jade in the Grade One Triumph Hurdle at the Cheltenham Festival in 2016.

This was his fifth career success.