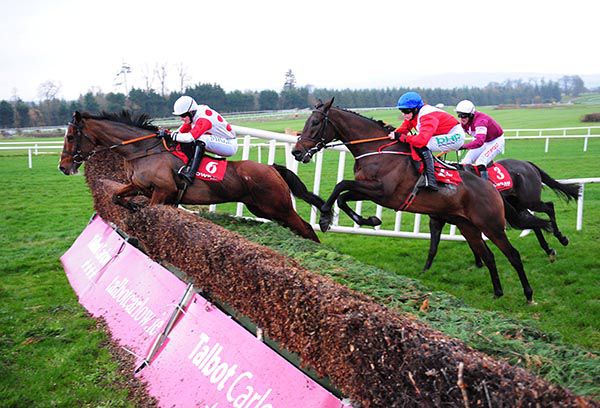 Trainer Margaret Flynn is considering the next plan of attack with her stable star Dr Mikey.

The 10-year-old may be getting on in terms of age, but he is still relatively lightly raced - having run just 17 times in total under rules.

Dr Mikey won twice in the bumper sphere, twice over hurdles and made a winning debut over fences when accounting for the talented A Plus Tard at Gowran Park in November.

He fell on his most recent outing in the Grade Three Klairon Davis Novice Chase at Naas and Flynn is struggling to find him a suitable opportunity to get his season back on track.

"He is in very good form. It’s just hard to find a race for him at the moment," said the Waterford handler.

"We don’t want to be running him in a graded race and he is not ready for a handicap. Between now and the end of the season there are seven novice chases. One is for mares and four of them are restricted to horses rated 113 or below, so they are very scarce.

"He is not eligible for any of them really at the moment, so I don’t know what we are going to do.

"There is a couple of winners’ hurdles, but they are a bit restricted as well, so it’s difficult, and he is a little bit ground dependent as well, in that we don’t want it too quick. We’ll have to see.

"Handicap races aren’t really his cup of tea because they won’t leave him alone in front and he does too much early. He is better left to his own devices."

Flynn also provided an update on her useful mare Oh Me Oh My.

The daughter of Winged Love has wins over hurdles and over fences to her credit and was last seen finishing sixth in a Cork Grade Three.

Flynn added: "Oh Me Oh My will probably run on Sunday at Thurles in a Grade Three. To look at her you would say she wants a good cut in the ground, but her best form is on better ground.

"If she doesn’t run on Sunday, there is an ordinary mares' novice chase for her back at Thurles next month.

"She works with Dr Mikey and he does all his best work early, while she always arrives late."