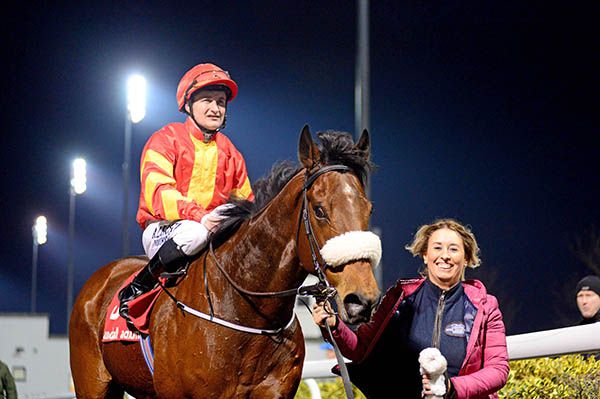 Confrontational bagged his third win of this winter's All-Weather Championship at Dundalk today when completing a double on the day for his jockey Shane Foley in the Baroneracing.com Handicap.

The John Murphy trained five year old made a winning debut for today's jockey at Down Royal in June 2016 and today registered his fourth success, all under Classic winner Foley, when beating Kasbah by half a length.

Afterwards Foley quipped ”it only took us two years to get his running style right! He’s really enjoyed it from the front.”

He added “I thought I was going to be shot down in the last furlong but the more I got stuck into him the more he kept finding.

“He was a bit more lit up today than he was the last day. I thought he was doing a bit too much for the first three (furlongs) but lucky enough he gave himself a bit of a breather and I was able to sit on him until we turned in.

“He has a bit of a kick and it was just a question of whether he could sustain it against a better type of horse. He was rated in the 90’s at one stage.

“He’s been running with a hood up until his last run just to keep him settled and Sinead (O’Sullivan) does a great job with him because he’s not easy beforehand to lead up.

“He’s on the improve again and he’s enjoying the surface.”