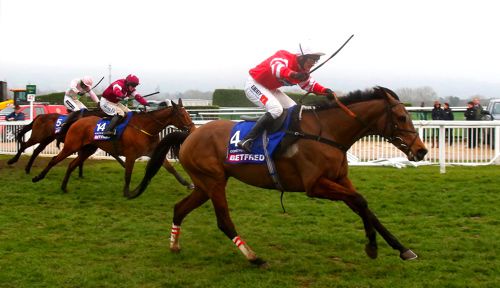 Cheltenham Gold Cup winner Coneygree has been retired, connections announced after the 12-year-old pulled up at Ascot.

Coneygree, who won the Festival feature in 2015 as a novice, was having only the 18th race of an injury-curtailed but glorious career in Saturday’s Keltbray Swinley Chase on Saturday.

He led until the 14th under Nico de Boinville, reviving final memories of their greatest triumph together nearly four years ago — but the exertions told as Coneygree was eventually pulled up two from home in the Listed handicap won by Calipto.

“Wear and tear and injuries have just got the better of him now, so we’ll call it a day,” she told ITV Racing.

“I’m only sad because he (still) loves it. He still thinks he’s a racehorse.

“I think what happens now is that it would be fine (to run him) on the perfect bit of ground and on the perfect day — but you can’t risk hurting him for that. ”

“Obviously the Gold Cup (was memorable) — although I don’t remember it, because it was all so stressful,” she added.

“When he won (the Kauto Star Novice Chase) at Kempton, and he just romped away from them, it was very exciting to suddenly realise how good he was.

“What a fairytale! We bought the mare (dam) for a couple of grand to breed something for my dad (Lord Oaksey).

“(Hennessy Gold Cup winner) Carruthers was the first foal, him, Flintham — it is a fairytale, and I hope it gives everybody hope.”