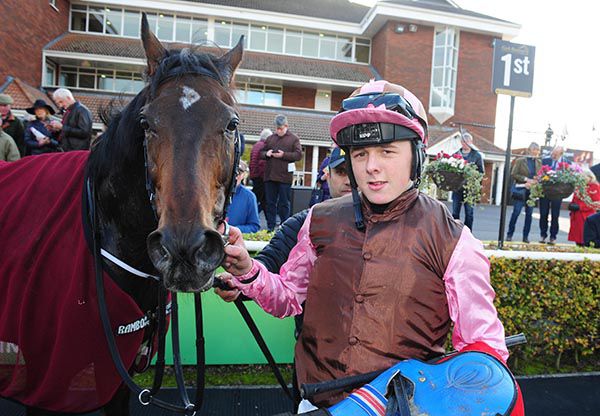 The six year old son of Cape Cross was a dual winner at this summer's Galway festival and today made a winning return to hurdles, arriving from off the pace to score a four and a half lengths win over Automatic under a well judged ride from Brown.

Afterwards jockey Brown stated “that's my first win over jumps but I rode a bumper winner for Alan King and had three flat winners for Richard Fahey.

“I'm 18, from Malton in North Yorkshire and am with Joseph (O'Brien) for four months. I love it there and it's the best job I've ever had. It is unreal there and he's the nicest man in racing.”

Trainer O'Brien's assistant Brendan Powell added “on his Galway runs he had to win it but he has done it nicely. It is nice for Oakley as it is only his third ride over hurdles and he is a tidy rider. He won a big handicap for Richard Fahey but his weight got to him and has been with us all summer and Joseph likes him. Taking 7lbs off 12 stone is handy and he did it well.

“He is in the sales but it think the lads are quite keen to keep him but I'll leave it to Joseph. He'll go on soft ground and will cope with a good cut but not a bog.”

Linger carries the colours of the Rugby & Racing Syndicate which is headed by retired Leicester and Munster rugby player Johne Murphy.