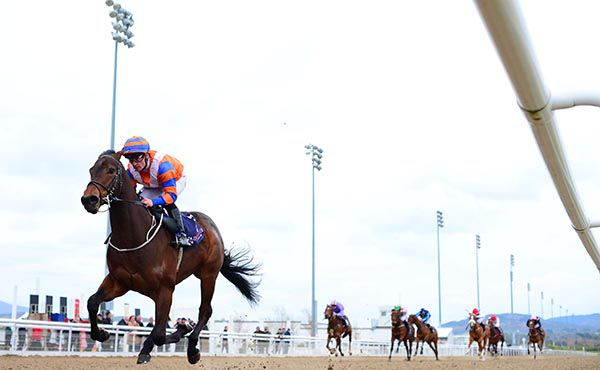 George Cornelius (14/1) could hardly have took the eye any more under Mark Gallagher at Dundalk in the Irish Stallion Farms EBF Median Auction Maiden.

The Stuart John Robinson-owned and Kieran Cotter-trained son of Bungle Inthejungle soon led and he ran freely on his debut.

The juvenile went four lengths clear before halfway, and pushed along over a furlong out George Cornelius stayed on strongly inside the final furlong to triumph very easily.

“He's for a new owner and he has three or four in the yard and this is his first runner,” said Cotter.

“He was doing his best to get over here today but family matters kept him away. I'm sure they are all looking at it on TV and delighted with that performance.

“He's been working very well with some of our two-year-olds and it augurs well for the rest of them.

“We've never had him off the bridle before and have just been trying to keep a lid on him.

“He just did a demotion job today and that's what he does at home, out and run and doesn't stop.

“He has a bright future and hopefully we'll be able to hold on to him. Our other two-year-olds are fairly smart too so hopefully we'll have a good season and who knows where this lad will go after that.

“With a two-year-old first time out you never know what could happen. You could see pulling up that he just jinked left and right and got loose. That could happen before a race, you just don't know.

“We had a few pound on him and it's been a great day for us.

“We have a couple we think are as good but they still have to go and do it on the track.

“We have ten two-year-olds and four or five that are well forward. We have a few new owners in the yard that bought quality stock with Danny Murphy racing.

“It has upped the level in our yard and it's great to be able to come and compete.

“When you are in a smaller yard you are just competing in the small grade handicaps but we've proven it today that that's what you get if you send us the horses.

“We did say three months ago that we might be going to Royal Ascot so the dream is still alive.”

The Irish Horseracing Regulatory Board Veterinary Officer examined American Lady trained by J.A.Stack, at the request of the Stewards and reported the animal to be post race normal.