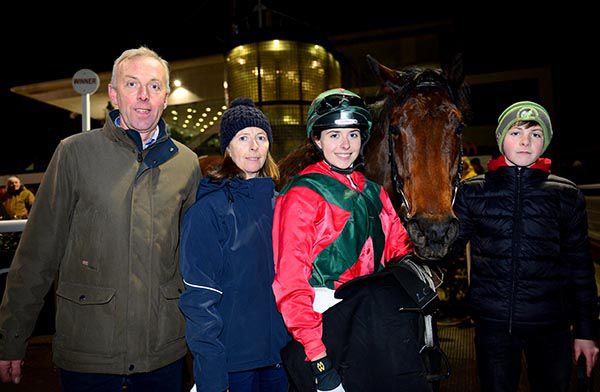 The BetVictor Handicap over a mile, race two at Dundalk, could hardly have went better for the Doyle family from Moyne in Thurles with young Emma winning on her first ride aboard her father Tim’s Northern Surprise (20/1).

Tim’s wife and Emma’s mother Claire owns Northern Surprise, and for good measure the Doyle’s sent out the second horse too, Spanish Soprano

A neck split Northern Surprise and Spanish Soprano and the Doyle pair were half a length up on 4/1 joint favourite Mulzamm in third. He had looked a likely winner until late on.

Emma Doyle (19) only got her licence yesterday and she explained: "I honestly couldn't believe it, he just kept picking up down the straight. I was barely touching him.

"I knew him from his good days when he won three around here and he loves to come wide. Not a bother on him, he tried to run away on me coming back!

"I should know him a lot better but he is dad's pet, he rides him out every single day. I know him well enough at this stage."

And on her first ride she said: "It was a lot faster. I've ridden in a few schooling races but it is much different out there.

"I wanted to drop in and just kind of get a schooling around but it worked out a whole lot better for me!"

On beating her father's Spanish Soprano she said: "Coming up to the furlong pole I saw her and I was like 'there she's gone' but he (Northern Surprise) just kept picking up for me."

She added: "I'm 19 and I'm in my second year at Maynooth so this is just a weekend job really. I'm studying business and marketing. The three and a half hour journey up paid off.

"Hopefully for the winter he'll give me a few chances!"