Greatrex positive about Le Bague An Roi after Huntingdon run 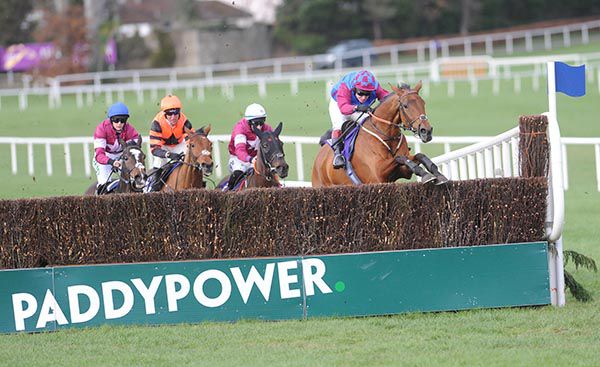 Warren Greatrex is no hurry to decide whether to pitch La Bague Au Roi in the Ladbrokes King George VI Chase at Kempton on Boxing Day.

The Lambourn trainer might give the Christmas showpiece serious consideration if conditions were unseasonably good, otherwise he might run his stable star against her own sex in a Listed mares’ chase over two and a half miles at Doncaster three days later.

Greatrex was simply delighted the dual Grade One-winning mare bounced back from a disappointing reappearance at Wetherby to finish a creditable third to Top Notch in the Peterborough Chase at Huntingdon on Sunday.

“I think we’ll sit on it. She’s obviously still in the King George,” said Greatrex.

“If it was freakish weather and it really dried up it would definitely come into the equation, but there’s a mares’ listed chase on the 29th at Doncaster which is a good pot. We could look at that.

“We probably just want to mind her a bit, because she does act on very good ground. We can have plenty of fun with the season ahead, but the main thing is she’s back in one piece — she’s still got the enthusiasm and the fight for it.”

La Bague Au Roi has taken her Huntingdon exertions well, according to her trainer.

“She’s come out bouncing. It was great to see her back to how I thought she would run,” he said.

“Obviously at Wetherby was a blip. Until they run again you’ve got it in the back of your mind, wondering whether it was a blip or something else.

“But she showed real enthusiasm. She jumped brilliantly. She really put it to them and I’d say around there the trip was just a bit on the short side.

“She wasn’t beaten far and she was coming back a bit at the end, so she did everything right apart from win and now we can look forwards from here.”

Greatrex is also looking forward to getting Emitom back to the racecourse for the first time since he ran the classy Champ to three lengths in the Grade One Sefton Novices’ Hotel at Aintree in April.

“At the moment, touch wood, everything is good. He’s doing plenty of work and the plan is to run on January 1 at Cheltenham in the Relkeel Hurdle,” he said.

“He’ll probably need at least one away day, just to sharpen him up, but, as for where we are now, I’m very happy with him and I can’t wait to get him back.”