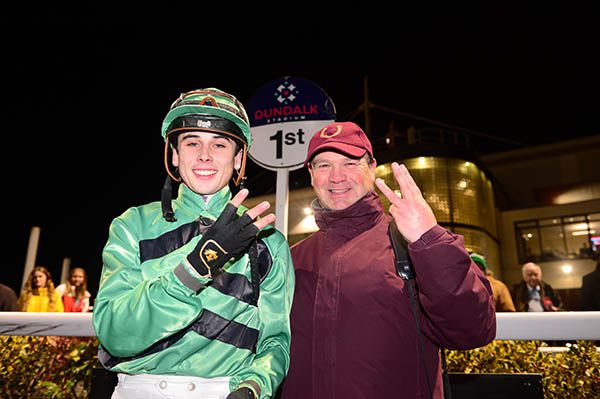 as Spelga defied a 9lbs ratings rise for a recent win at the Co Louth venue to land division two of the Irishinjuredjockeys.com Handicap.

The son of Sir Percy had shown improvement since first racing on the all-weather surface in October and today followed up last week's half-length course and distance success with another same half-length success, over Magi Gal

Afterwards Halford said “when he won the last day he got a bit of confidence from it. Ronan gave him a lovely ride, he stayed nice and cool on him and the gaps just appeared in time.

“He's a tough genuine little fella and he does what he does. We'll keep him going up here for a while anyway.

“I'm delighted for Paul as he had to be very patient with him. I bought him as a breeze-up horse last year and it just took him a while to get the hang of things.

“He was a weak horse, and weak minded, but he's getting a bit of confidence now.

“He's found a level that he can operate off and he's genuine.”