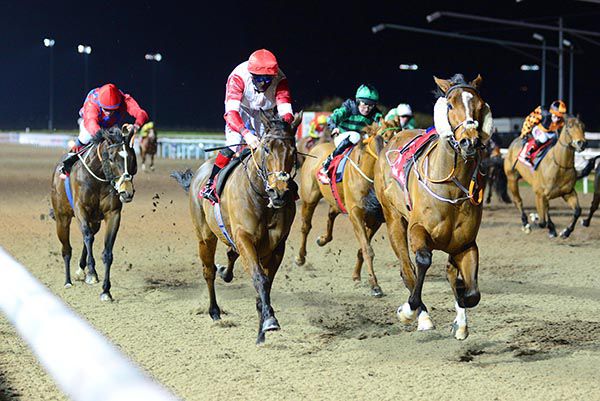 Gary Halpin completed an opening races double at Dundalk this evening as the jockey landed the Floodlit Friday Nights At Dundalk Handicap with the John Geoghegan trained, owned and bred Massa Lubrense

Halpin won the opener on Ted Walsh's Layfayette Hill and doubled his score on Massa Lubrense who avoided loose horse Descendent, who unshipped rider early in the race, inside the final furlong when beating Reckless Lad by a length and three parts.

Following the race Geoghegan stated “he’s been working well at home. We ran him here the last day and we were a bit worried that his wind might have been catching him out so we brought him off to the Curragh to have a scope done. That came back clear so we said that we’d keep going and he’s done it well there tonight.

“The key to him is that he has to settle. If he settles early and drops the head he’s fine but if he runs free that’s when you are in trouble.

“He’s a bit fragile so we have to mind him but hopefully he’ll be okay in the morning and we can come again.”