Hamilton rushes back to greet Allen 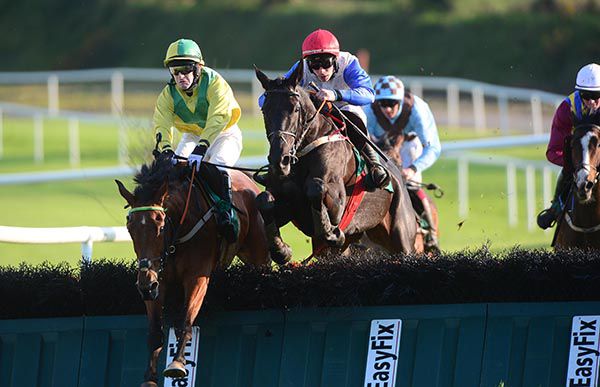 There was a local success in the feature event at Downpatrick tonight as Dynamic Allen scored for trainer Brian Hamilton.

The French-bred attracted support in the Molson Coors Laffy Bar Mares Handicap Hurdle and rewarded her fans having been backed from 9/1 this morning into 5/1.

In-form jockey Kevin Brouder made ground on the daughter of Network coming down the hill and she jumped into the lead over the last flight.

Dynamic Allen had chased home Iknowwhereiamnow on her most previous start at Fairyhouse last month.

Hamilton said: "I've just got here from the (Necarne) point-to-point and I watched the race on the phone going through Downpatrick!

"I had a runner in the first race of the point-to-point and had to rush back here to see it.

"I'm delighted, it just worked out grand. She obviously needs better ground, the ground made the difference to her. The track probably didn't suit her but the mares' race was just maybe more suitable for her.

"She's in again on Wednesday at Punchestown but I don't know, we'll see what way she comes out of that there.

"She'll be better over a fence in time and she has a nice pedigree. A more galloping track would suit her.

"She had a few breathing issues so we had to have her wind done a couple of times. She seems to be on the right road now.

"I thought she maybe needed to be a wee bit handier but he (Kevin Brouder) said she was flat to the boards and that's the way to ride her as she likes passing horses. Once she sees she is going forward and passing horses she races far better."

It continue a terrific few days for Brouder, who was recording his fifth winner this week.