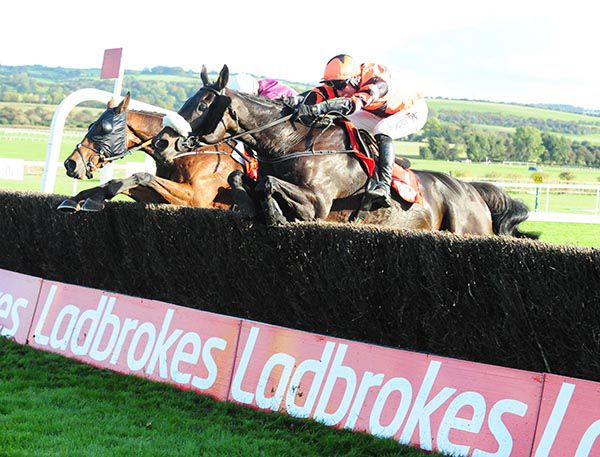 Harrington's ever increasing flat string has been one of the talking points of the year with two year olds Millisle and Albigna both winning at Group 1 level and today she gained her first Graded win over jumps since Jett's own Grade 2 Devenish Chase win at Fairyhouse in April.

Today both Jett and Alpha Des Obeaux were involved in a protracted duel from the second last fence with Jett eventually getting his head in front at the line, when scoring by a short-head.

Afterwards Harrington, who along with jockey Power were doubling up on the day, said “he’s a funny horse; he loves small fields, loves that ground and finally the trainer has got him over the right distance (3m1f).

“That’s the best round of jumping he’s ever put in because he wasn’t under pressure and I think he’s got a bit stronger this summer.

“He’s not a horse to run in handicaps so we’ll look at Grade 2 and Grade 3 chases over three miles. He’ll have to go to England now and maybe he could go to Wetherby (for the Charlie Hall).

“It’s great for Gerry (McGrath, owner/breeder) as he’s just had his knee done.”

Jett hails from a top class national hunt pedigree with his dam La Noire breeding no less than three Grade 1 winners, including Champion Hurdle winner Jezki, and two other Grade 2 winners including Jett.