Harrington Calling Time on her rivals 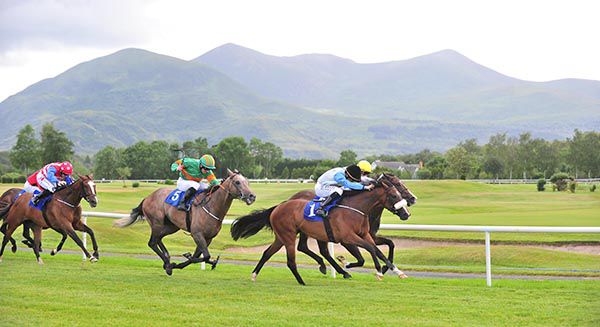 Another summer day and another winner for Jessica Harrington, this time with Calling Time in the Flesk Handicap in Killarney over an extended mile.

The 5/1 favourite was settled in fourth by Shane Foley and was switched out at the two pole to mount his challenge.

She was ridden to get the better of Jered Maddox approaching the final furlong and was kept up to her work to take the honours. Imposing Supreme (12/1) tried to chase her down in the final furlong but was three parts of a length adrift at the line.

Der Mac came in a couple of lengths further back at 25/1.

"We were running her back quick but she didn't have a hard race at Roscommon, so we said we'd take a chance and it worked out.

"I think that is a good trip for her for the moment but she would probably get a little further."

Calling Time won in Roscommon just over a week ago. This victory made it three in her last four outings.

This was Harrington's 15th winner on the Flat in the last three weeks.